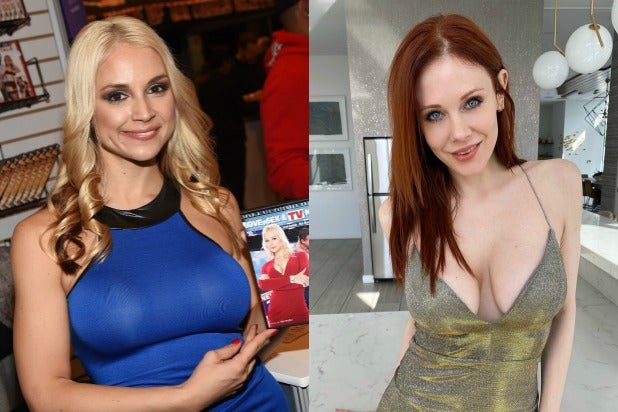 The coronavirus pandemic has brought Hollywood productions to a screeching halt. And the spread of COVID-19 has done the same to San Fernando Valley productions — yeah, we’re talking about pornography.

Trying doing that, Josh Gad and other mainstream movie stars.

Unfortunately, much like in traditional Hollywood, pornographic-video directors and crew members can’t really monetize their skillsets during a studio shutdown. But like Shaulis said, the stars of adult films can.

“Most performers — adult models and actors — are encouraged to utilize their own personal time to continue to create content as much as possible,” Sarah Vandella, a 13-year veteran performer in the business, told TheWrap.

While that’s generally the case, the suggestion is now more important — and more stressed — than ever.

Solo shoots are of particular and lasting value because performers can make residuals off of their own videos. That’s not typical of a studio production. In a studio film, performers generally get paid a daily rate on the same day of the shoot. And then they go home, leaving another party to handle the other aspects of production, like editing, distribution and promotion.

Vandella (pictured above, left) has lost a few studio days due to coronavirus precautions, though she knows of colleagues who have already had 10 or more canceled.

Ward (above, right) is making the most of her self-quarantine — and the cosplay specialist is making more money than usual.

“Actually, I’ve seen upticks in some of my income because people are home and they want entertainment and they want to get away from all the corona stuff,” Ward told TheWrap. “Also I’m stuck at home, too, so I’m doing a lot more content just to fill time as well.”

Those supplying the demand are doing quite well. “Over half” of Ward’s income has come from her solo and self-produced videos for years now, she said. That’s a pretty setup for the reality of March 2020. (And probably April 2020, and possibly May 2020, and hopefully not June 2020…)

“People are hunkered down and so they want to see content,” Ward said. “That’s a remarkable thing — that we can earn good money in a crisis like this, when a lot of people are hurting. I’m really grateful for that.”

Ward not only has webcam cha-ching, her contract with Vixen Media Group affords her “financial security — more than most,” she said.

That’s because being on contract like Ward is a rarity in the business these days. Back in 2010, Vandella was a contract star with Zero Tolerance. Like most of her colleagues, Vandella now works independently, which in the self-quarantine world created by COVID-19 means no studio productions with that same-day pay and no scene partners. While currently lucrative, it’s also fairly limiting.

“For the next couple of weeks it primarily will just be the solo content, fan interactions, Skype shows, etc.,” Vandella said.

Vandella pointed out that industry partners who live together are currently filming scenes together, which is an advantage. Ward predicted that in the coming weeks performers may get bored and venture out for a healthy partner to self-produce content with. (Editors note: All interviews in this story took place before California governor Gavin Newsom ordered all residents stay at home until April 19.)

Fortunately, the entrepreneurial angle Vandella and Ward have exploited in good times and in bad is not particularly hard or all that expensive to get up and running.

“All you would need is some decent light, a decent cell phone and a good personality,” Vandella said. “It helps if you have props and toys and a cute background and such, but not every content piece has to be some elaborate set design. Fans appreciate both elements, but I think in this case people just want to see the real you and feel a real connection. Cutting through some of the fluff might help.”

Ward likes to balance stylized stuff created by a staff of professionals (“films with great production value and script and acting and everything — but still to have really hot sex”) with the stripped-down “you and your iPhone” version, which both performers appreciate for its authenticity.

Financially, Vandella and Ward both said they can personally weather this storm.

“I know I’ll be OK, thank God, because I am very well-established in the industry,” Vandella said. “I’ve been around for 13 years and I’ve never seen anything like this. I’ve seen industry moratoriums, but this is something that is beyond our control. I’m just grateful that I’ve always been smart with my finances and that I do come from a really good family.”

Not everyone in their shared business is as lucky.

“My heart breaks for those performers that are newer in the industry and don’t quite have a fanbase big enough to help carry them through the next six to 12 months,” Vandella said. “God willing it won’t be that long.”

“I feel really bad for people who are starting out and they don’t have a big following and they’re paycheck to paycheck and they were looking to pick up scenes. It’s the same as any servers in restaurants or bartenders — anybody working in any service industry like that,” Ward said. “[Mainstream] actors got doubly hit because most of them do work in bars and restaurants. They got hit from all ends.”

And it’s in hard times like these that Vandella says she feels it’s her “duty” to provide some “relief” where she can.