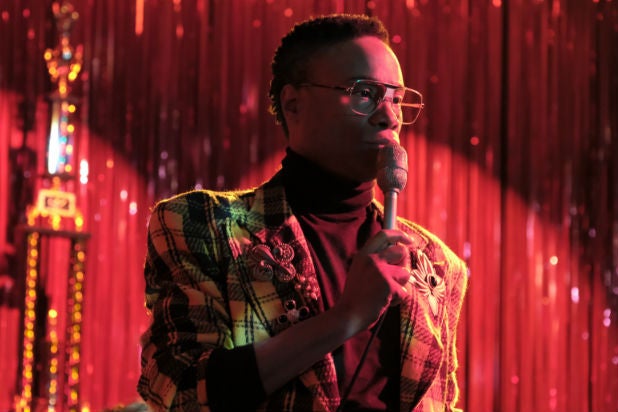 We’ve reached the halfway point in the first season of FX’s groundbreaking “Pose,” and as the stakes in the underground queer ballrooms of 1980s New York ratchet up, so do personal victories and tragedies for the characters in the Ryan Murphy drama.

Broadway and recording veteran Billy Porter had a shining moment on Sunday as Pray Tell, the stunt queen emcee who hosts the weekly balls where gay orphans, trans woman and a family of LGBTQ people gather for organized self-flattery and some fierce dress up.

Pray Tell is never short on comebacks or crowd-pleasing disses for the brave children who walk various categories at the balls, in search of validation — but he’s never been as dimensional as he was in Sunday’s installment “The Fever,” written by trans activist Janet Mock.

“It’s been years and years I’ve been in this business. I’ve always had big dreams, but this piece has taught me to dream the impossible,” Porter told TheWrap of the experience.

The show’s young queer men all seek HIV testing after a health scare in their inner-circle, a moment Pray Tell had been avoiding for decades as he watched his friends die in droves from the then-mysterious disease.

“When I read the script I felt that this is exactly the story I’ve always wanted to tell  — this story of all of my friends who I lost, the generation that we lost,” Porter said.

It’s a destabilizing moment, that one of the series anchors might suddenly be compromised when so much is working against the heroes of this story — marginalized, unemployable, sick and fighting for acceptance. Pray Tell is diagnosed as HIV positive.

“The writers room [went] back and forth quite a bit about whether Pray Tell would be HIV positive,” tweeted show co-creator Stephen Canals. “We ultimately decided that we didn’t want to shy away from the reality of the time. It was a heartbreaking decision for us, but one rooted in truth.”

Porter praised Murphy and the network for supporting their storytelling “in this time  where everybody is under attack, it’s such an artful way — through narrative — to change hearts and minds. We need that kind of work, that is positive about the celebration of life. I made it to the other side thankfully. To have lived long enough to do this.”

It should be said that “Pose” does not deal exclusively in the tragedy and death of its LGBTQ characters the way most similar content is often accused of doing. The secret? Have a ball.

“The smart part is the balls … showing you the joy, showing you how we celebrate. Our family comes together and it’s a ball,” Porter said of the underground pageants, which were often built on the community emulating or “passing” as prototypes from the day’s social hierarchy — like Wall Street businessmen and cover girls.

Porter said one journalist he recently spoke with called the show’s levity “sugarcoating.”

“It’s not sugarcoated. What this person was responding to is always having a negative narrative, being used to this group of people being tragic. They choose to celebrate life anyway,” Porter said.

Here are all the stars who have publicly joined the LGBTQ community since Pride 2017.