As the dust settles on the 82nd Academy Awards, it’s time for a few thoughts about the show and glimpses into a night of firsts.

With the help of a last-minute change in my cinematography pick, I wound up correctly predicting 20 of the 24 categories, which was definitely a better showing than I was expecting.

It’s also the best showing I’ve seen among Oscar pundits (tying Guy Lodge from In Contention), though one of the readers at Awards Daily nailed 21 of 24.

Like just about everybody else, I wasn’t expecting Geoffrey Fletcher’s screenplay win for “Precious.” And while my vote in both sound categories would have gone to “The Hurt Locker,” I figured that the Academy would give one of them to “Avatar.” 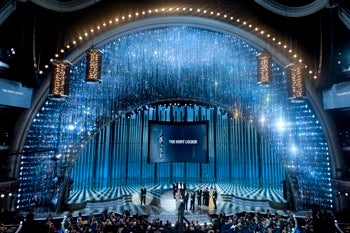 And then there were those pesky shorts. I walked out of the initial screening thinking “Logorama” might win the animated category, but was persuaded that Wallace & Gromit had the upper hand. I should have figured out that if voters were nervy enough to go for the live-action winner “The New Tenants,” which I did call, they also would have honored the comparable entry in the animated category.

And I should have paid attention to a big rule in the doc shorts category: Among a batch of films about serious social issues, always pick the one that gives you a little uplift along with the heartbreak.

As soon as the final rehearsal ended, activity picked up on the red carpet.

The consensus among those who’d watched the run-through, which had been cut by 12 minutes after the previous night’s dress rehearsal, was that the sensibility of the Academy Awards had undergone a significant shift.

“This is the year,” one veteran of more than a decade of Oscar shows told me, “that the Oscars were finally taken out of the hands of the old Jews and turned over to the 30- and 40-something gays.” 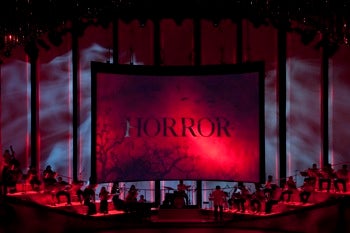 Do you think Oscar co-producer Adam Shankman has heard some of the criticism of Sunday night’s Academy Awards show?

“did the best i could last night with so many perameters [sic],” he wrote. “just so everyone knows the horror tribute was linked 2 roger cormans govs oscar.”

But when the horror montage is separated from the Corman tribute by half an hour, three awards, one Best Picture clip, two commercial blocks and the introduction of the show’s musical director and conductor, it’s a little far-fetched to think that audiences are going to make that link.

And when the film package is immediately preceded by a “Paranormal Activity” spoof, and introduced by the two stars of “Twilight” with nary a mention of Corman – well, that means that however it played in Shankman’s mind, to viewers the tribute came across as an attempt to capitalize on two hot, young-skewing movies, not as a nod to Hollywood tradition. 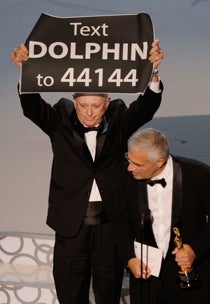 On the red carpet before the show began, I spoke to Louie Psihoyos, the director of “The Cove,” and asked if he was going to give a pointed, political speech if he won.

“Yes,” he said. “This is the most popular television show in Japan, and I’m not going to waste that opportunity.”

Ric O’Barry, the activist who helped inspire and was a major figure in the film, grinned and showed me a rolled poster he was carrying.

A few hours later, “The Cove” won and O’Barry unrolled his poster (which read “text DOLPHIN to 44144”) – whereupon the director immediately cut to a wide shot, and the orchestra drowned out anything Psihoyos might have said.

Courtesy of All These Wonderful Things website, here’s the speech Psyihoyos would have said, if O’Barry’s sign hadn’t freaked out the producers:

"We made this film to give the oceans a voice.

“We made this movie because through plundering, pollution and acidification from burning fossil fuels, ALL ocean life is in peril from the great whales to plankton which incidentally is responsible for half the oxygen in this theater.

“Thank you, Black OPS Team for risking your lives in Japan — and thank You Academy for shining the brightest lights in the world on ‘THE COVE’ ……

“Japan, please see this movie for yourselves! Domo Arigato!"

One thing the show did pretty clearly, I’d say, is to prove once and for all that the failure of the Academy to nominate “The Dark Knight” was the reason for the move to 10 Best Picture nominees.

I mean, they were so desperate to get that movie into an Oscar show – any Oscar show, even one that’s a year late — that the art of sound editing and mixing was demonstrated not by using clips from this year’s nominees, but by showing scenes from last year’s winner, “The Dark Knight.” 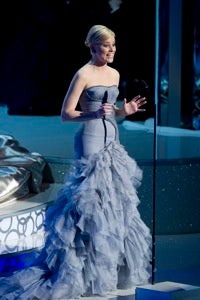 When I spoke to them a few days before the show, producers Bill Mechanic and Shankman were clearly annoyed at an Academy dictum that had forced them to put things back into the show that had once been taken out.

Mechanic said the decision was one of the reasons the show would not come in at three hours.

I don’t know everything that came out and was put back in, but I do know the recap of the Scientific and Technical Awards was once eliminated from the show, and then restored fairly late in the game.

For the record, that segment, including the introduction of Sci-Tech host Elizabeth Banks, took almost exactly one minute.

When Sandra Bullock presented the award for Best Cinematography, she described the cinematographer as “on set, the first friend I always make.”

Her main instructions, she said, were always, “Dude, make me look good … And then feel free to get all artsy and whatnot with your reverse tracking shots and your scary Steadicam mishegoss. But always remember job one.”

Cinematographers, it should be said, HATE this. Year after year, beautiful actresses appear on the Oscar show to present this award – and year after year, they describe the D.P.’s job in a way that makes it sound as if it’s all about making performers look pretty.

The cinematographers grumble, but it keeps happening, because that’s what actresses want to talk about. And because the cinematograhers branch of the Academy is not the squeaky wheel that gets the grease. (That would be the sound branch, always the most vocal when it comes to complaining about being disrespected.) 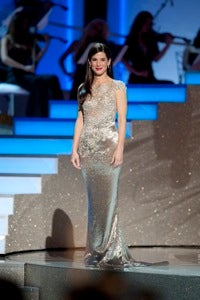 Speaking of Bullock, blogger Pete Hammond was the first to suggest that she might be an Oscar contender for “The Blind Side.”

He did so in his column Notes on a Season back in early November. At the time, I linked to his piece and commented, “I’ll believe it when I see it.”

Pete has proudly pointed out his prescience a few times now, so kudos to him for this one. And I won’t even mention the trial balloons he also floated for Brenda Blethyn, Tobey Maguire, Roy Scheider, Robert De Niro, “Amelia,” “Brothers” and “Michael Jackson’s This Is It,” among others.

Or maybe I will. 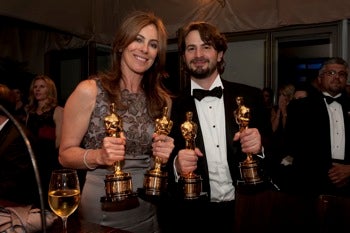 Despite all the champagne being consumed at the Governors Ball, the hottest bar in the room wasn’t serving alcohol.

Tucked away at the back of the ballroom was a small room with a red velvet rope, a wooden counter fronted by a few high chairs, and three stations where pre-engraved plaques were affixed to the statuettes of the night’s Oscar winners.

At about 11 p.m., Kathryn Bigelow finally made her way back there; she was carrying a pair of Oscars she’d won for directing and producing “The Hurt Locker,” while writer-producer Mark Boal carried another pair.

(An aside: Can we all agree that one of the lamest parts of the night was when the orchestra played “I Am Woman” as Bigelow walked off the stage with her Best Director trophy?)

Bigelow took a seat behind the counter, shook her head, and called a friend over to watch the process. “Look at this!” she said with a big grin. “I have my own personal engraver!”

When Fisher Stevens, producer of “The Cove,” came in to have his plaque affixed, the two embraced and talked about working together.

“First we’ll end the war and save all the dolphins,” said Bigelow, laughing. “And then what should we do next?”