Headlines Friday called it “The Film That Disturbs the Pied-Noirs” (Algerian born French nationals). and gendarmes with riot gear lined the streets all day.

Protesters had gathered at the War Memorial a few blocks from the Palais to demonstrate against director Rachid Bouchareb’s film “Hors La Loi” (“Outside the Law”), which played later Friday at the festival. Protestors felt the film unjustly portrayed France’s role in the Algerian war that led to that country’s independence in 1962. 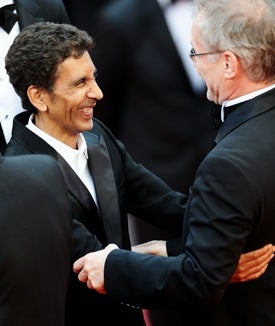 A few hours later, the filmmakers appeared for their photo call and press conference.

Actor/co-producer Jamel Debbouze tried to lighten the mood at the photo opportunity by helping himself to one of the photographer’s cameras, which he used to snap photos of the press and some close ups of his colleagues.

The film was shown Friday afternoon in a climate of intense security.

The filmmakers, most of whom had previously teamed with the same actors to create “Days of Glory,” which garnered the collective best actor prize at Cannes in 2006, were not strangers to stirring debate – since “Glory” was pegged as anti-French at a point where, according to the director, people had not yet seen the film.

Director Rachid Bouchareb (pictured) reminded everyone that “the film is designed to open a calm debate, not a battleground. There is no reason for future generations to have to deal with this. Let’s have a calm debate about France’s colonial past so we can move on.”

Bouchareb called the allegations that there was pressure to not represent “Outside the Law” as a French film, false. He went on to acknowledge that his film speaks of political violence. “Violence is part of all revolutionary movements. The question is always, how far it should go.”

Bouchareb said that other films in the festival, such as Ken Loach’s “Irish Route,” are similar in that respect.

When asked about the film’s title, he said that the word “outlaw” was used to describe the Algierians in the French press. He said that he set out to make a film that would be viewed as a Spaghetti Western.

The first audience saw the film on Friday, and reports are positive:

“It was a thrilling film. I am was not familiar with the story from an Algerian point of view.”

“An episode we had not seen onscreen before.”