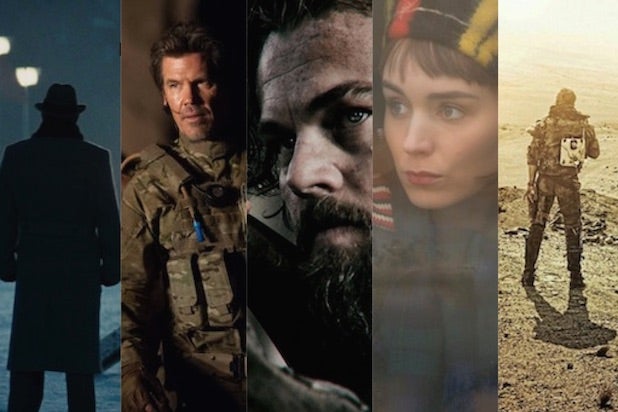 “Bridge of Spies,” “Carol,” “Mad Max: Fury Road,” “The Revenant” and “Sicario” have been nominated as the best film work of 2015 by the American Society of Cinematographers, the ASC announced on Wednesday morning.

The roster of nominated cinematographers makes up one of the most celebrated lineups in ASC history. Emmanuel Lubezki, who shot “The Revenant” using only natural light in the wilds of Canada and Argentina, has won the last two ASC Awards (and the last two cinematography Oscars) for “Birdman” and “Gravity,” and was also honored by the ASC for “The Tree of Life” and “Children of Men.”

Roger Deakins, who photographed “Sicario” in the bright desert sunlight near the U.S./Mexican border and in dark tunnels beneath the ground, has received 14 ASC nominations, winning for “Skyfall,” “The Shawshank Redemption” and “The Man Who Wasn’t There.” Remarkably, he has never won an Academy Award.

John Seale, the cinematographer on the thrill ride that is George Miller‘s “Mad Max: Fury Road,” won the ASC Award for “The English Patient” and was nominated for “Cold Mountain,” “The Perfect Storm” and “Rain Man.”

Janusz Kaminski, whose work on “Bridge of Spies” marked his TKth collaboration with Steven Spielberg, has been nominated by the ASC for “Lincoln,” “Saving Private Ryan,” “Schindler’s List,” “Amistad” and “The Diving Bell and the Butterfly.”

And Ed Lachman, who worked with director Todd Haynes to recreate the look of 1950s photography in “Carol,” was previously nominated for his work with Haynes on the 2003 feature “Far From Heaven” and the HBO miniseries “Mildred Pierce.”

All five men are past Academy Award nominees, and all except Deakins and Lachman have won Oscars.

Cinematographers expected to compete for an Oscar cinematography nomination but not included on the ASC list include Robert Richardson for “The Hateful Eight,” Dariusz Wolski for “The Martian” and Matyas Erdely for “Son of Saul.”

The nominations mark the second time this week that “Spotlight” was left out of key guild nominations, after it wasn’t included in the American Cinema Editors’ ACE Eddie nominations on Monday. But given the powerhouse field in the cinematography category this year, the relatively restrained “Spotlight” was not expected to be a contender with the ASC.

Last year, four of the five ASC nominees went on to receive Oscar nominees, with the ASC pick “The Imitation Game” replaced on the Oscar slate with the Polish film “Ida.”

Over the last 20 years, almost 80 percent of the ASC nominees have gone on to receive Oscar nominations for cinematography, with the winners matching 11 times, including the last two years in a row.

The ASC is not a guild, but a 96-year-old non-profit honorary association of cinematographers who are invited to join based on their body of work.

The American Society of Cinematographers Awards will take place on Feb. 14 at the Hyatt Regency Century Plaza Hotel in Los Angeles.