You see TheWrap on the web and in your inbox … now, you’re invited to join us at the movies as well.

The Wrap Screening Series, which over the next two months will present eight evenings of awards-contending films followed by Q&A sessions with filmmakers and actors, kicks off next Tuesday night, Oct. 27, at the Arclight Sherman Oaks with Lee Daniels’ “Precious: Based on the Novel Push by Sapphire.”

An unprecedented audience award winner at both Sundance and Toronto, “Precious” has won rave reviews, picked up vocal support from the likes of Oprah Winfrey and Tyler Perry, and put itself in the thick of the Oscar race. Not only does it sit comfortably in the top 10 on the Gurus of Gold chart at Movie City News, but several of its actors, including Mo’Nique and newcomer Gabourey Sidibe, have become formidable contenders in the acting categories. 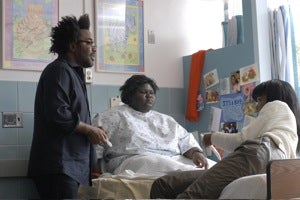 Daniels and Sidibe will join us to screen the film and talk about its devastating look at an inner-city teen trying to survive an abusive home life. The discussion will be moderated by TheWrap’s editor-in-chief, Sharon Waxman.

Sharon and I hope you’ll join us at the Arclight on Oct. 27. If you’re already a registered reader of TheWrap and our First Take Newsletter, simply RSVP here; if you’re not, you can register and RSVP in one step. More information on the screening series, including the list of films and participants, can be found at the Screening Series page.

Subsequent films will include “Nine,” “A Single Man,” “Up in the Air,” “The Hurt Locker” and “District 9,” with participants scheduled to include Rob Marshall, Tom Ford, Jason Reitman, Kathryn Bigelow, Neil Blomkamp and Sharlto Copley.

Seating is on a first-come, first-served basis.

(Above, left to right: Lee Daniels, Gabourey Sidibe and Xosha Roquemore on the set of “Precious.” Photo by Anne Marie Fox/Lionsgate)