As I mentioned in an earlier post, my favorite movie at the Toronto International Film Festival this year was "Lebanon," Samuel Maoz's gripping and cinematically innovative war movie set in 1982.

Other highlights from this year's program, in my mind, include Harmony Korine's playfully bizarre "Trash Humpers" and the Coen brothers' "A Serious Man." The first two features still need to secure U.S. distribution, but "A Serious Man" comes out Oct. 2. Take note of them, because TIFF audiences apparently did not. 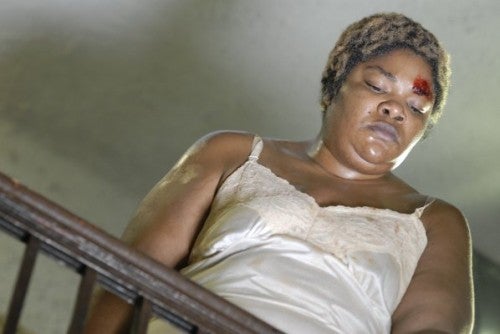 None of these movies won awards Saturday (although Oscar buzz for the Coens movie has commenced). Instead, the top prize of the festival — the Cadillac People's Choice Award — went to Lee Daniels' "Precious: Based on the Novel 'Push' by Sapphire," a moving if sensationalistic chronicle of Harlem strife.

Its triumph is a rather conventional one, considering the acclaim that this movie has developed since its Sundance premiere back in January. Lionsgate bought the movie and managed to secure endorsements from Tyler Perry and Oprah, both of whom walked the red carpet at the movie's Toronto premiere a few days ago.

Is it possible that audiences were manipulated into voting en masse by the presence of these showbiz giants? Maybe, although that shouldn't detract from the merits of "Precious" as a flashy shot of dramatic intensity. Expect this movie to continue to hog the spotlight as it careens toward a November 6 release date — but keep your eyes peeled for "Lebanon," too.

The full release from the TIFF awards ceremony is listed below:

The award for Best Canadian Short Film goes to Pedro Pires for Danse Macabre. Based on a concept by Robert Lepage, director Pires’s exquisitely photographed morbid ballet pushes the traditional dance film to new cinematic heights. The jury remarked: “There was one film that had such devastating beauty, that watching it was having fireworks shattering your heart. A prayer for the dying, a love song to the living, everyone must see this beautiful work.” The jury would like to recognize and support Jamie Travis for The Armoire with an honourable mention, an exciting filmmaker with an original voice and an exquisite vision. The award offers a $10,000 cash prize and is supported by the National Film Board of Canada.

The SKYY Vodka Award for Best Canadian First Feature Film goes to Alexandre Franchi for The Wild Hunt for its assured, inventive and bold command of film form traversing contemporary and mythic landscapes marking the launch of an audacious new talent. Set in the fantasy-reality of a large role-playing game, this film captures the culture of costume play and the potentially dangerous intersection of the real and made-up worlds. The award carries a cash prize of $15,000.

PRIZE OF THE INTERNATIONAL FEDERATION OF FILM CRITICS (FIPRESCI PRIZE)

The Prize of the International Federation of Film Critics (FIPRESCI Prize) for Discovery is awarded to Laxmikant Shetgaonkar for The Man Beyond the Bridge (India). Far from the sensory overload of India’s big cities, this film explores smaller but enduring dilemmas, drawing together keen environmental sensitivity with a nuanced view of village dynamics. A widowed forest ranger Vinayak develops an intimate relationship with a mentally ill woman, risking becoming an outcast. Director Shetgaonkar, immersed in the culture of the region, tells his tale with grace and attentiveness, taking the villages traditions and beliefs seriously, while casting a jaundiced eye on those who exploit them.

The Prize of the International Federation of Film Critics (FIPRESCI Prize) for Special Presentations is awarded to Bruno Dumont for Hadewijch (France). This film is a hypnotic study of the possibilities and consequences that arise from an absolute belief in God, and the fascinating dynamic that emerges. Hadewijch is beautifully conceived and rigorously developed and speaks to the present with care and insight. Dumont has previously played at the Festival with La Vie de Jésus (99), Twentynine Palms (03) and Flandres (06). L’humanité and Flandres were both awarded the Grand Prix at the Cannes Film Festival.

The Cadillac People's Choice Award is voted on by Festival audiences. This year’s award goes to Lee Daniels's Precious: Based on the Novel “Push” by Sapphire. From director Lee Daniels comes a vibrant, honest and resoundingly hopeful film about the human capacity to grow and overcome. Set in 1987 Harlem, it is the story of Claireece "Precious" Jones, an illiterate African-American teenager who is pregnant for the second time by her absent father and abused by a poisonously angry mother. Despite her experiences, Precious has a dream that other possibilities exist for her and jumps at the chance to enroll in an alternative school. There she encounters Ms. Rain, a teacher who will start her on a journey from pain and powerlessness to self-respect and determination. The film stars Mo'Nique, Paula Patton, Mariah Carey, Sherri Shepherd, Lenny Kravitz and introduces Gabourey Sidibe. The award offers a $15,000 cash prize and custom award, sponsored by Cadillac.

First runner-up is Bruce Beresford Mao's Last Dancer and the second runner-up is Jean-Pierre Jeunet's Micmacs (Micmacs à tire-larigot).  The Cadillac People's Choice Award presents a free screening of the Cadillac People’s Choice Award-winning film tonight. The screening takes place at 9 p.m. in the Visa Screening Room at the Elgin. Tickets will be available on a first-come, first served basis beginning at 7 p.m. at the Visa Screening Room at the Elgin. For more information on this screening, visit tiff.net.

New this year is a Cadillac People’s Choice Award for Documentary and Midnight Madness. The Cadillac People's Choice Award – Documentary goes to Leanne Pooley's The Topp Twins. Fun, disarming and musically provocative, the Topp Twins are New Zealand’s finest lesbian country-and-western singers and the country’s greatest export since rack of lamb and the Lord of the Rings movie trilogy. Runner-up is Michael Moore's Capitalism: A Love Story.

The Cadillac People's Choice Award – Midnight Madness goes to Sean Byrne's The Loved Ones. A troubled teen’s prom dreams are shattered by a series of painful events that take place under the mirrored disco ball, involving syringes, nails, power drills and a secret admirer in this wild mash-up of Pretty in Pink and Misery.  Runner-up is Michael Spierig and Peter Spierig's Daybreakers.