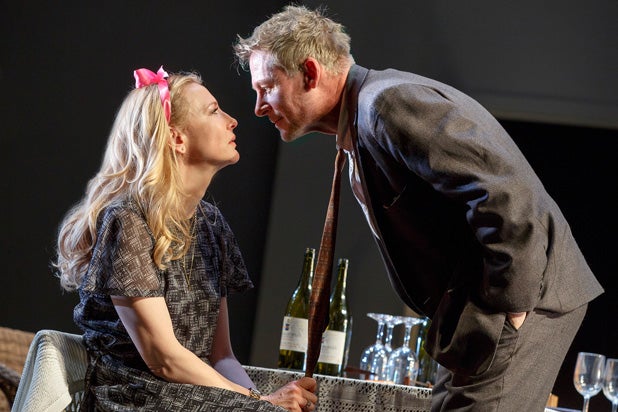 Cate Blanchett is the attraction. Richard Roxburgh is the revelation.

That overly brief assessment does not detract from Blanchett’s considerable achievement in Andrew Upton’s new play, “The Present,” which opened Sunday at the Ethel Barrymore Theatre. Upton and Blanchett would probably agree that the play, freely adapted and updated from Anton Chekhov’s “Platonov,” is all about that title character, Mikhail Platonov, a middle-aged schoolteacher who is as much adored by women and he is disgusted by himself.

“Platonov,” Chekhov’s first play, was never produced, and if it had been would have clocked in at over five hours. Such esteemed playwrights as Michael Frayn and David Hare have taken cracks at bringing it to the stage, but it is Upton’s “The Present” that is the most likely to endure.

This production comes from the Sydney Theatre Company, with its Down Under cast intact, making for 13 Broadway debuts. It’s a talented ensemble under John Crowley’s direction, and they make some of the awkward shifts in the plot grind a little less noisily. It’s obvious why Chekhov didn’t tinker with “Platonov,” and went on instead to write “The Cherry Orchard” and four other full-length masterpieces before his death at age 44 in 1904. It’s also obvious why Upton, Frayn, and Hare took up the challenge of the play. Mikhail Platonov is the Blanche du Bois of roles for men.

Nowadays, it’s sexist to call anyone a nymphomaniac. The politically correct charge is that there’s no male equivalent for the word. But of course there is: satyr. Somehow, though, the word “satyr” doesn’t sum up Mikhail quite as well as “male nymphomaniac.”

And Chekhov via Upton has given him no fewer than four female characters to return his advances and then some. There’s the comfort that Mikhail’s wife (Susan Prior) brings him, the sheer lust he feels for the teenage girlfriend (Anna Bamford) of his middle-aged brother-in-law (Toby Schmitz), the excitement that comes from meeting a former lover (Jacqueline McKenzie, brimming with all kinds of suppressed angst), who happens to be newly married to the stepson (Chris Ryan convincingly playing an adult just out of diapers) of the woman whom Mikhail has always truly loved. Which brings us to Anna Petrovna, the character played by Blanchett.

Also Read: Jake Gyllenhaal to Sing on Broadway in 'Sunday in the Park With George'

Mikhail and Anna proclaim love for each other, but since they’re basically spiritual twins it’s an affection of the most narcissistic kind, and the two of them head up a gathering of infants, brought together to celebrate Anna’s 40th birthday at her country estate.

You might want to spank the lot of them. As played by Blanchett, Roxburgh & Co., you can’t take your eyes off them. Blanchett careens between her character’s unbridled lust for Mikhail and Anna’s boredom with her position as the widow of a powerful Soviet general. Roxburgh’s character allows him to mix it up even more. Ennui and self-disgust propel him to both devour and seek refuge in the company of women — that is, when he isn’t picking a fight with one of Anna’s male guests. The men hate him as much as the women love him, naturally.

Crowley’s staging is at its most effective in the abstract third act of this four-act play. Roxburgh sits alone in the fog with a bottle of Stolichnaya after Anna has blown up her Chinese folly, which is really just a fancy name for an enclosed gazebo. (As with the gun she brandishes in the play’s first 60 seconds, the bomb doesn’t really make much sense, but it’s one helluva way to bring down the curtain.)

There in all that foaming dry ice, other characters come to woo Mikhail or condemn him or start a fistfight with him. Roxburgh makes self-inflicted disillusionment utterly appealing, while at the same time preparing us for the utter logic of what will be his final wish in the next act. He has seduced us along with every woman on stage.

Along with the gun and the bomb, the flaws of this great, sprawling, messy play are not entirely obliterated by the stellar performances and direction. The dozen other characters, including Anna, often emerge as mere props circling in Mikhail’s orbit. The actors are good enough to make sense of their respective journeys, even though Upton has sometimes taken shortcuts to get them into Mikhail’s space.

The long first act, wherein everyone gathers for Anna’s party, might be less tedious if we knew right from the get-go that two of the older guests (David Downer and Martin Jacobs) had been invited because Anna’s broke and in need of a new, rich husband. Why these unsuspecting suitors feel the new to bring their ill-bred sons (Eamon Farren and Brandon McClelland) to the party goes completely unexplained. As unfocused as “The Present” sometimes seems, it also exposes an overly schematic structure.

Least effective is Upton’s update of the action to the 1990s. No doubt some old Soviets wax on about the good old days of the Iron Curtain and how Glasnost put a real damper on their country’s supremacy in the world. But who knew that Communism bred such narcissism? Maybe there’s something to the rugged individualism of unbridled capitalism after all.