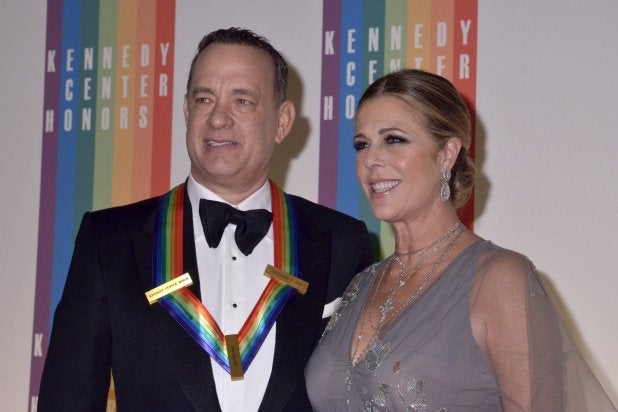 “Tom’s career began just like so many Hollywood legends — dressing in drag for a show called ‘Bosom Buddies,’ kung-fu fighting The Fonz on ‘Happy Days.'” Obama said to laughter, before going on to note that Hanks “won our hearts” in comedies like “Big” and “Splash.”

“As the years passed, he told us ‘there’s no crying in baseball,’ ‘life is like a box of chocolates.’  He told ‘Houston, we have a problem.’  And as a cartoon cowboy, he showed us we can always keep our faith in a little boy.”

“For his tremendous support of our veterans, he’s in the Army Ranger Hall of Fame.  For his support of the space program, he has an asteroid named after him.  Through Tom, we’ve seen our World War II heroes not simply in sepia-tones somewhere in the distance, but as they truly were: gritty, emotional, flawed, human.  Through Tom, we saw the courageous faces behind an AIDS epidemic often overshadowed by stigma and bigotry.  Through Tom, again and again, we’ve seen our passion and our resolve, and our love for each other.”

Obama described Tomlin as a versatile performer who has pushed boundaries in her career, sometimes playing characters with an  “edge, a little dark, but fundamentally optimistic.”

“In ‘Nine To Five,’ Lily Tomlin plays an undervalued employee whose chauvinist boss steals her ideas and screams at her to get coffee.  Finally, she and two coworkers get so fed up, they kidnap him.  They get to work changing the office.  Working moms get treated better.  Productivity rises.  The top brass are thrilled.  It’s basically a live-action version of the working family policies I’ve been promoting for years,” joked Obama. “We’ve sent DVDs to all members of Congress.”

“I can promise that your contributions to American stage and screen will live on.  For her genius, her compassion, for just being funny, we honor tonight Lily Tomlin.”

Obama, who once publicly sang an Al Green song, didn’t repeat that event Sunday. Instead, he called his public singing “a fluke.”

“Nobody can sing like Al Green. That soul, that light falsetto. His music can bring people together,” Obama said.

“‘POTUS’ is a pretty good nickname — but let’s face it, it’s not as cool as ‘Sting,'” Obama said at one point.

Sunday night celebrities, including Jane Fonda, Martin Short, Lady Gaga, Bruce Springsteen, Garrison Keillor, Herbie Hancock, David Letterman and Stephen Colbert, praised the award winners as part of a program that will broadcast on CBS Dec. 30, with Obama present at that event, too.

Short, delivering a salute of Hanks, opened his remarks by turning to Obama and noting his recent immigration action.

“Welcome Mr. President and thank you,” Short said, according to a White House pool report. “Because of you, the ‘Three Amigos’ can stay indefinitely.”

Fonda, saluting Tomlin, her co-star in “Nine to Five,” noted Tomlin’s Ernestine the telephone operator character from “Rowan and Martin’s Laugh-In” and Ernestine’s comments about listening in to calls.

“Remember the days it was only the operators listening in on our calls?”  Fonda said.