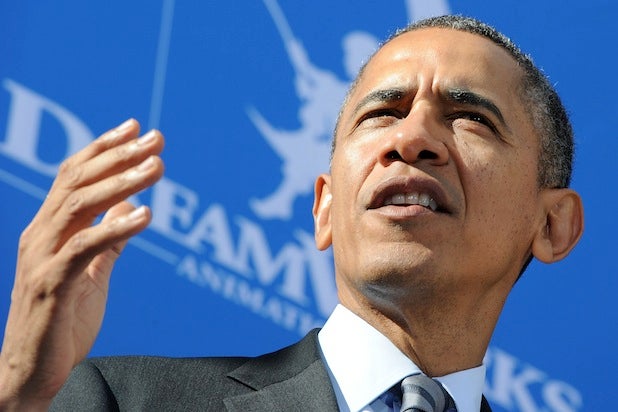 President Obama defended his policies during an economic address at the DreamWorks Animation campus on Tuesday — including his struggling health care reform — by quoting the late film critic (and fellow Chicagoan) Roger Ebert.

“I was fortunate enough to get to know Roger, and was always inspired by how he handled some really tough stuff,” Obama said. “He said, ‘Kindness covers all of my political beliefs.’ … When I think about what I’m fighting for, what gets me up every single day — that captures it.”

Obama started his day with a visit to DreamWorks Animation’s motion capture and sound studios in a tour led by CEO Jeffrey Katzenberg. His brief speech began around 1 p.m., starting with the President praising Hollywood and Southern California as an “economic engine.”

“We have shaped a world culture through you … I would like to work here,” he joked after his tour. “The lights were pretty dim in the offices and I’m pretty sure I’d fall asleep.”

Also read: President Obama Greeted at DreamWorks Animation by an Alien – Who Speaks in His Voice

Obama spent much of his speech praising and thanking Hollywood for its economic and cultural contributions, saying that “in a global race for jobs and industries, the thing we do better than anybody else is creativity.” He was cautionary as well, calling on the industry not to glorify gun violence in the wake of Sandy Hook.

But for the most part, he reflected back the kindness that the industry has shown him, both as a social leader and a fundraising candidate.

Obama kept his remarks mercifully short, but saved a moment at the end to thank his hosts (though he did get in a friendly dig at Katzenberg earlier, saying the cartoon mogul has “a healthy sense of self”) .

“Thank you Dreamworks for what you do. Thank you Jeffrey for your hospitality,” Obama said as he prepared to leave the stage. “Can’t wait to see your next movie!”

(Below, Obama in DWA’s sound facility, where Steve Martin and Jim Parsons — to his left — were voicing a scene of the upcoming film “Home”)