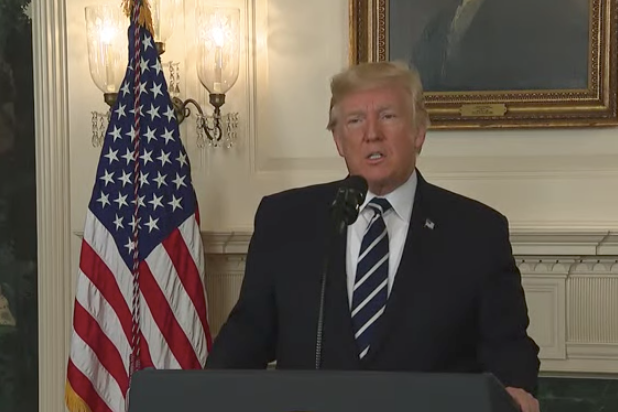 In his first public address following the Las Vegas shooting that killed 58 people and left 515 more injured, President Donald Trump said it was “an act of pure evil” and that we “cannot fathom their pain or imagine their loss.”

Trump championed the police and first responders for their “true professionalism” in attending to the victims and locating the shooter.

The president also said that he’ll be traveling to Las Vegas on Wednesday.

Also Read: Las Vegas Shooter Stephen Paddock 'Was Not a Gun Guy at All,' Says Brother

“My fellow Americans, we are joined together today in sadness, shock and grief,” Trump said to open his remarks, before saying the FBI and the Department of Homeland Security are working together with local authorities on the attack.
“To the wounded who are now recovering in hospitals, we are praying for your full and speedy recovery, and pledge to you our support from this day forward,” said Trump.
The president ordered that the American flag be flown at half mast in honor of the victims.
However, he did not mention suspected shooter Stephen Craig Paddock of Mesquite, Nevada, by name in his six-minute speech.

“In moments of tragedy and horror, America comes together as one, and it always has. We call upon the bonds that unite us: our faith, our family, and our shared values. We call upon the bonds of citizenship, the ties of community, and the comfort of our common humanity,” Trump said.  “Our unity cannot be shattered by evil, our bonds cannot be broken by violence, and though we feel such great anger at the senseless murder of our fellow citizens, it is our love that defines us today, and always will. Forever.”
The attack was the deadliest mass shooting in modern U.S. history, surpassing the terror attack at the Pulse gay nightclub in Orlando, Florida, that killed 49 people and injured 58 others in June 2016.
Paddock, 64, was found dead on the 32nd floor of the Mandalay Bay, where the attack occurred across the street at a country music festival. Paddock had “in excess of 10 rifles” when he was found, according to Clark County Sheriff Joe Lombardo.

“We believe the individual killed himself” just before authorities entered his room, Lombardo said.

Trump concluded his address saying “may God provide the grieving families with the strength to carry on.” He did not take questions from reporters.

“In times such as these, I know we are searching for some kind of meaning in the chaos, some kind of light in the darkness. The answers do not come easy,” said Trump. “But we can take solace knowing that even the darkest space can be brightened by a single light, and even the most terrible despair can be illuminated by a single ray of hope.”