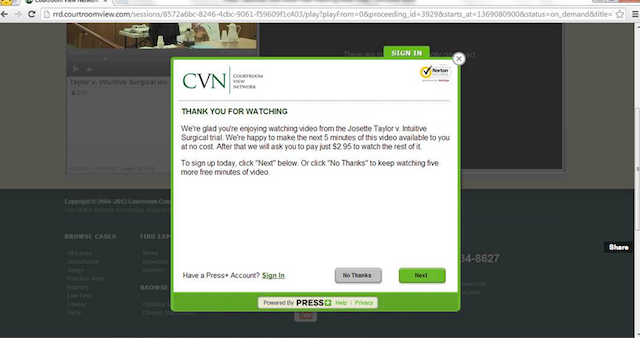 Press+, which provides paywalls for the websites of several top newspaper chains, launched a new product Wednesday so entertainment and news companies can charge for their online videos.

The service launched with the trials of the Microsoft antitrust suit, the liability suit in the Virginia Tech shooting and a claim against the manufacturer of surgical robots for sale, all on Courtroom View Network, a video news service that streams trials online. Viewers can watch a few minutes, at which point they will be asked to pay to watch more. Co-founded by CourtTV creator Steven Brill (left), Press+ operates what it calls a meter — a technology that charges customers after they consume a certain number of articles. Though it took six months to sign up its first partners in the publishing world, it now works with more than 450 content owners worldwide, including McClatchy (Miami Herald, Sacramento Bee) and MediaNews Group (Denver Post, San Jose Mercury News).

Its new online video product, which also lets people watch a certain amount of video content before they pay, is intended to open up a new revenue stream for newspapers, entertainment companies and advertisers. Everyone from Yahoo to YouTube to ABC wants to figure out how to make more money from online videos.

“It strikes me that video producers — in entertainment, news and everything in between — are realizing the same thing magazines and newspapers realized a few years ago,” Brill, who founded Press+ with former Wall Street Journal publisher Gordon Crovitz, told TheWrap. “You ain’t gonna make it on advertising revenue alone; you are going to need to get people to pay for content.”

While newspapers like the Journal that produce video could be clients for this new product, Brill argued that the videos that would work best are those that are “long-form” with “some kind of narrative arc.”

That ranges from courtroom dramas to online news to entertainment shows produced by the likes of Yahoo and AOL.

“The way to get people into video stories is to let them watch it for a little while,” Brill said. "You can't have a wall where if you pay you can watch because then if you don't pay you never get to see it."