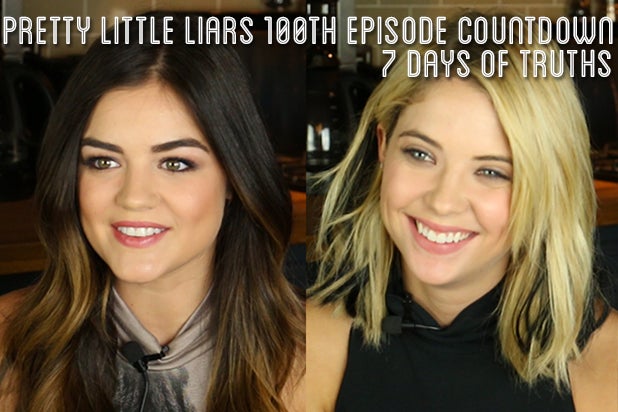 With the 100th episode of ABC Family’s “Pretty Little Liars” nearing, the show’s stars Lucy Hale and Ashley Benson sat down with TheWrap to talk about the highly-anticipated episode and reflect on the ones before it.

Hale, who plays Aria, revealed that the 100th episode is full of homecomings. Alison, Caleb and Jenna are back in Rosewood, and to the chagrin of many, Alison is returning to school.

“Things are kind of back to how they were, but there a lot of people that are, you know, not so happy that she’s back,” said Hale.

Hale and Benson, who plays Hanna, are happy that Tyler Blackburn (Caleb), is back on set. Benson revealed that she loves having him around, but struggles to get through scenes with him.

“I can’t get it together,” Benson said. “This morning, I was only working with him and I’m laughing the whole time.”

However, when it comes to their characters, the reunion may not be as exciting.

“I think it’s going to be weird in the beginning, but I think there’s going to be a fun storyline with us as the season goes on,” Benson said.

Though a lot has been revealed in 100 episodes, the one thing that has remained a mystery to fans and cast members alike, is the identity of the illusive “A.”

“I mean, I always thought it’d be pretty cool if it was one of the main characters, one of the main girls,” Hale said, but added that she didn’t think the writers would ever do that.

Watch Hale and Benson dish on all the drama to come in the video below.