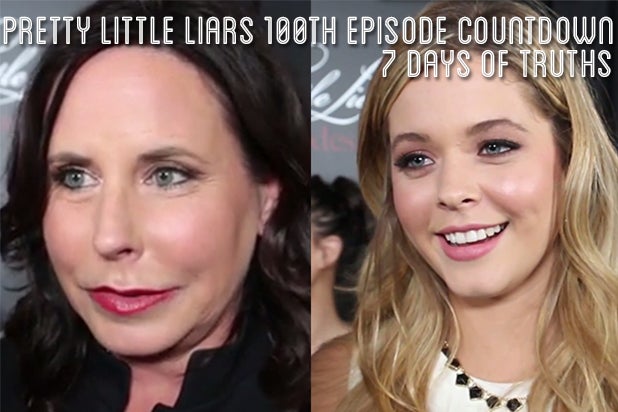 “This is the season of a freight train that is on the tracks and doesn’t stop,” King revealed.

From pill addictions to sexuality, PLL has always addressed heavy issues and King assures viewers that the drama will only intensify.

“There’s some self-medicating going on, sleeping with people you shouldn’t be sleeping with, lies,” King said.

The 100th episode is full of surprises. King revealed that it has been her favorite episode thus far, but that the rest of the season is as equally fulfilling.

Watch TheWrap’s interview with King below.

“Pretty Little Liars” star Sasha Pieterse plays Alison DiLaurentis on the ABC Family series, and after her presumed dead character went missing for two years and four seasons, she is finally back in Rosewood.

Alison’s disappearance left many lingering questions and complexities for her four best friends to deal with. Now that Alison is back in town, the show’s dynamic and Alison’s old relationships have went through a big transformation.

Pieterse shares what it’s like now that Alison is back in the picture, full time. (Watch TheWrap’s interview with Pieterese below.)

“It’s been really rocky between everyone,” Pieterse said. “It’s interesting to see who’s gonna fall apart, everyone has been cracking at different angles.”

Alison and the rest of the liars are having trouble trusting each other. Spencer and Alison are bumping heads. Complications and tensions are high between Aria, Alison, and Ezra. Alison heads back to school with all the peers that she used to bully.

“She’s a tornado now,” said Pieterese. “I think she’s just trying to keep everyone together while everyone else is losing their mind.”