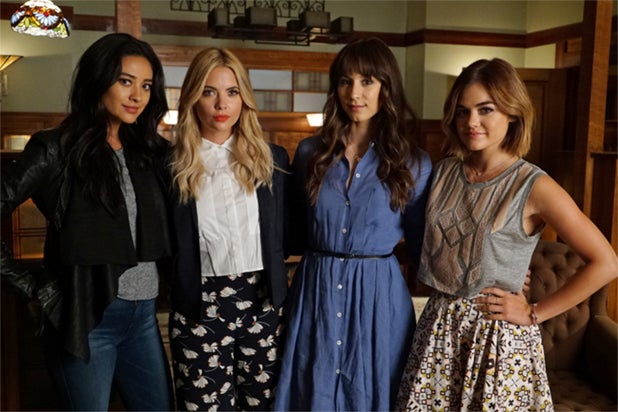 Maybe you’ve seen ads for “Pretty Little Liars,” and wondered who exactly they are, and what they’re lying about, and exactly what the deal is with the cadre of scheming young women.

It’s okay: That’s just one of the signs that you’re older than 30.

“Pretty Little Liars” is a complicated show, especially if you haven’t been following it since it’s premiere in 2010.

Also read: Why the 'Pretty Little Liars' Share a Network With an 85-Year-Old Televangelist

When the show comes back with its midseason premiere on Tuesday, it’ll be with a (mostly) clean slate. The majority of its storylines wrapped up in the August finale.

So for those looking to jump into the show without starting from the beginning, you probably won’t get a better chance than now. Here’s a primer to help you keep straight all the lies, and liars:

Who are these Pretty Little Liars?

When the show started, there were four of them: Aria (Lucy Hale), Hanna (Ashley Benson), Emily (Shay Mitchell) and Spencer (Troian Bellisario). But in Season 4, the girls found out their friend Alison (Sasha Pieterse) wasn’t really dead.

Why are they liars?

Because teenagers lie, it’s what they do.

The original premise of the show was that the group of girls were being harassed by a mysterious person who seemed to know all of their secrets following Alison’s “death.” So there was a lot of lying and secret-keeping as the girls tried to get to the bottom of who was blackmailing them with info about Aria’s secret affair with her teacher, or that time they accidentally blinded one of their classmates.

Why are they pretty?

Because this is television.

Why are they little?

So who’s this “A” person I’ve been hearing about?

Well, five-and-a-half-season-long story short, “A” is Alison’s sister. Tormented by her parents and locked away in a mental facility for a childhood misunderstanding, Ali’s older sister Charlotte (a.k.a. CeCe Drake, previously Charles DiLaurentis) was fiercely protective of her sister. So when she thought Ali’s friends were happy Ali was “dead” — she was a bit of a mean girl, so there may have been some sense of relief — Charlotte kind of snapped.

So Alison faked her death? Why?

Ali was being harassed by “A” long before the other four girls (Although it was a different person whose moniker was later taken over by Charlotte), and she believed faking her death was the best way to get out of that situation. So when she was hit over the head and her family assumed she’s been killed, Ali just kind of went with it.

You don’t know the half of it. But it was pretty much all wrapped up in August.

Is any of it still relevant?

Kind of. All the “A” stuff is done, but Charlotte is still around. The show picks up after a five-year time jump. The Liars are out of school and living their separate lives, but they’re brought back to Rosewood (their hometown) to testify in Charlotte’s parole hearing.

Also, the promos seem to suggest the girls will be suffering from a bit of PTSD this season.

Yes. New haircuts and everything. When the show comes back, the Liars are all grown-up with new lives, new love interests and a brand new tormentor. Series creator I. Marlene King previously told TheWrap that the show’s new mystery will continue through the end of Season 7.

Is that everything I need to know?

Probably not! Like we said, the show is very complicated and King has a penchant for twisty storytelling. If we were to try to recap everything, we’d all be here for another five-and-a-half years.

But that should be enough to get through Tuesday’s episode, and if not, just ask Twitter. The fans there know more about the show than the rest of us combined.

The Evolution of ABC Family: From '700 Club' to 'Pretty Little Liars' Powerhouse (Photos)

Launched as Christian Broadcasting Network in 1977, the network has transformed itself over the years

The Christian talk show was one of the first on ABC Family -- back when it was known as the Christian Broadcasting Network. It premiered in April 1966 and moved to the network in 1977.