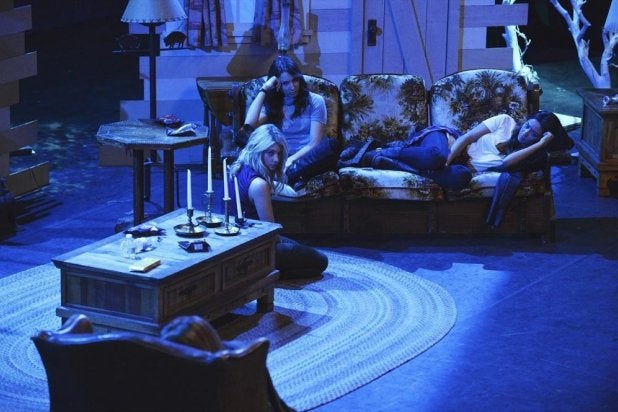 (Spoiler Alert: Do not read on if you haven’t seen the Season 5 premiere of “Pretty Little Liars,” entitled “EscApe From New York”)

“Pretty Little Liars” is known for its unexpected twists and turns, and near breaking of logic and reason. And it just kept them coming with its Season 5 premiere. Picking events up right where they left off, with Ezra being rushed to the hospital, after getting shot.

Fans were left wondering who shot Ezra, and if he would survive. He did, and he had a big scoop for Aria. But what was it. He either told her that it was Shana who shot him, or that “A” was Shana, or both. It was’t really clear. But was she “A”?

When confronted, Shana admitted that she was the one who locked the girls in the lodge on the night of the fire, which was a very “A” thing to do. But her motivation for everything probably came as the biggest surprise. Shana said that she is getting justice for Jenna, whom she loves. Jenna, however, had no idea what was going on.

If Shana was “A,” her reign is now over, after Aria killed her by hitting her in the head with a rifle before Shana could shoot someone else. But with “PLL” picked up for two more seasons, that can’t be the end of “A.” Of course, there could always be another “A” waiting in the wings to pick up the mantle and continue the torment. Or maybe it wasn’t Shana after all.

So Ezra survived the premiere, but Shana did not. And Aria is a killer now. MTV’s Shaunna Murphy declared that last one “quite the shock!”

“At the end of the night, [Detective] Holbrook had effectively located the girls in New York, and the four friends (plus Ali!) were returning home to Rosewood as changed women,” Murphy wrote. “It will definitely be interesting to see how the entire town reacts to the slightly sociopathic girl next door’s return, as well as how quickly the show will spoil the girls’ happiness and throw more A’s back into the mix.”

Buddy TV”s Morgan Glennon enjoyed the premiere, noting that “PLL” is “just as delightfully nuts as you remember.”

“The show moves fast and furious, and you can sometimes forget its breakneck rhythms,” she wrote. “This works to the show’s advantage, because it’s equally easy to forget all the plot threads which don’t quite tie together. I have no idea if we finally just discovered the identity of ‘A’, or if Shana was just part of the ‘A’ team, or if she was just another murderous thing altogether.”

Entertainment Weekly’s Samantha Highfill “might be suffering from whiplash” after that premiere.

“This episode had a ton of the elements that make this show fun,” she wrote. “There were ridiculous, laugh-out-loud moments — like ‘A’ turning into a ninja and hitching a ride on top of an ambulance — and suspenseful moments, all mixed in with some good old ‘Liar’ banter. And, of course, a tiny piece of the puzzle was solved, which is what we all want from every episode.”

Wetpaint’s Crystal Bell thought it was “a satisfying end to its somewhat sleepy Season 5 premiere.” She also had her own theory about “A,” writing, “The Liars seem pretty sure that their ‘A’ nightmare is over, but it’s highly unlikely Shana was ‘A.’ Jenna, on the other hand, is a whole other story. Could she be uber ‘A’?”