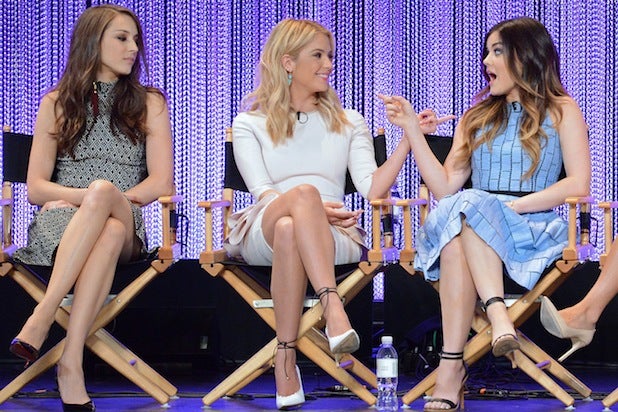 The “Pretty Little Liars” crew took the stage for PaleyFest at Hollywood’s Dolby Theater on Sunday to loud screams from the audience.

They discussed the upcoming season finale, Season 5 and which actor makes his return on their 100th episode.

Currently on the ABC Family show, the Liars are en route to meet Allison (Sasha Pieterse) in Philadelphia and fans know there’s much to discuss with the girl everyone once thought was dead.

“There will be a ton of questions answered on Tuesday,” executive producer Marlene King said. “You guys have earned those answers. You’ve been very patient with us. Thank you for that.”

Viewers were thrown a red herring earlier this season when Ezra (Ian Harding) was fingered as A and then we found out that isn’t true. He knows so much, because he previously knew Allison and he’s been spying on all the girls all this time while writing a book about Allison’s disappearance.

Harding said, “For the past few seasons, it’s been very wonderful and fun to play this push-pull of ‘Should I do it? Should I be in this relationship with [Aria] or not?’ I was kind of like there’s something else here, though. And I couldn’t really put my finger on it until Marlene said, ‘This is why.'”

And, as if the show hasn’t already dished up some major twists for Ezra, King said Tuesday’s season finale, which will feature flashbacks to a year before the show’s pilot episode, will present more.

“There’s a shocking Ezria twist,” King teased of redemption for Ezra on the season finale.

The producers and cast also revealed a bit of what will go down on the upcoming fifth season. First of all, Allison will make a Rosewood homecoming.

“The dynamic is going to change drastically,” said Pieterse. “[Allison] is now the victim. I felt that when it was the five of them, Allison was the leader. And then it became the four of them and they totally grew as individual people. Allison’s totally changed. They don’t know anything that’s she’s been through yet and the pain she’s experienced. I think welcoming her back will not be as easy as it should be.”

“A lot of Season 5 is about Allison’s homecoming,” executive producer Joe Dougherty, who’s currently writing the episode, said. “What’s going to happen to the dynamic?”

After the cancelation of spinoff “Ravenswood,” Tyler Blackburn will reprise his role as Caleb on “PLL” as a series regular next season. King revealed that he’ll be back on the fifth episode of Season 5, which also happens to be the drama’s 100th episode.

What does that mean for Hannah (Ashley Benson) and her budding relationship with Travis (Luke Kleintank) or Det. Holbrook (Sean Faris)?

“She’s got choices, give her options,” Dougherty joked.

See video: ‘Orange Is the New Black’s’ Jason Biggs, Taylor Schilling and Cast Answer: Is the Show a Comedy or Drama?