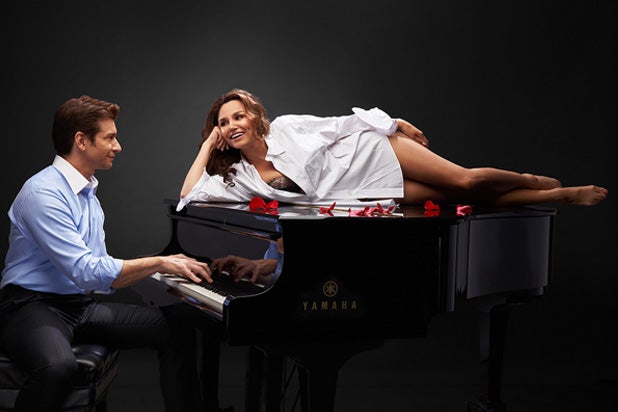 Prostitutes, once a staple of the Broadway musical, have been keeping a low profile in recent years. The old fantasy of sleeping with guys and making good money yielded long ago to real horror stories of exploitation, sexism, drug addiction and human trafficking. None of which has stopped Garry Marshall and J. F. Lawton from turning their hit 1990 movie “Pretty Woman” into a Broadway musical, which opened Thursday at the Nederlander Theatre.

Marshall directed the movie and Lawton wrote the screenplay, and they’re credited this time around as writers of the book, which means “Pretty Woman” the musical is a too-faithful adaptation of the original.

They have made one small but important update. The heroine’s seamy occupation is acknowledged at the get-go by turning her first song into a heartfelt lament, “Anywhere but Here,” effectively delivered in country style by a strong-voiced Samantha Barks.

Also Read: 'Gettin' the Band Back Together' Broadway Review: They Were Better Off Going Solo

Bryan Adams and Jim Vallance, the show’s songwriters, are at their best delivering country ballads that express a deep-seated desire to escape and move on. Barks’ Vivian (played on screen by Julia Roberts) shares that yearning with her love interest, Edward (Andy Karl), the businessman who is this disgruntled sex worker’s fairy godmother in Wall Street wolf’s clothing.

In the first act, Edward also wastes no time getting emotional when he sings “Something About Her,” followed by the bluntly titled “Freedom.” Karl charges the stage with sexual electricity without ever letting us see him turn on the switch. Plus, he has a plangent singing voice that avoids the Broadway bray despite the many shows on his résumé. But why is his Wall Street character singing with Vivian’s Georgia twang? Much more problematic is that he’s singing at all. Here’s one very repressed leading male character who should wait for a good 11 o’clock number to expose himself emotionally.

“Pretty Woman” the movie showcased Roberts’ comic talents, and much of that charm came from her trying to chip away at Rich Gere’s steely facade as Edward. Karl is no pushover, but heart-on-the-sleeve songs like “Freedom” rob the show of needed suspense. This john is ready to crumble even before Vivian famously tells him she’s a “sure thing.”

Since Marshall and Lawton have recycled the screenplay almost line for line, the musical is a reminder of how wit-free the original is. Most of the film’s humor derives from Roberts’ galumphing-giraffe-in-a-china-shop approach to challenging the hypocrisies of Rodeo Drive, Wall Street and Gere.

Banks often copies Roberts, but since she’s starring in a musical, Vivian’s gaucheries have been made bigger and therefore coarser. Whether she’s blowing her nose loudly or throwing her high-heel boots up on the desk, this Vivian is often simply uncouth. To her credit, Banks avoids giving us Roberts’ signature horse laugh.

Thanks also should go to the producers for not sticking Roy Orbison’s hit tune in the middle of Adams and Vallance’s original score. Every film-to-stage musical from “Thoroughly Modern Millie” to “Dr. Zhivago” has committed the sin of movie-audience pandering.

However, something’s missing without Orbison. Nothing in this show matches Roberts sashaying down Rodeo Drive to the thumping beat of “Pretty Woman.” Part of the problem is that Jerry Mitchell’s staging botches the Cinderella story. Yes, Vivian still gets a clothing upgrade. And Vivian is taught to dance for her first big date with Edward.

Unfortunately, Adams and Vallance don’t have the musical flair to deliver a big showstopper, and Mitchell, who also choreographs, loses his focus in these makeover moments. Instead of Vivian being the major attraction, three models wearing what look like leftovers from Disney’s “Aida” dominate “Rodeo Drive, Baby.” (Gregg Barnes’s costumes, when they’re not copies of Marilyn Vance’s originals, are atrocious.)

And when it comes to Vivian’s dancing lesson, the hotel manager (Eric Anderson) throws her aside to finish the tango “On a Night Like Tonight” with a far more accomplished dancer, who happens to be a bell boy (Tommy Bracco)!

Mitchell, overusing the game Anderson and Bracco, crams far too much extraneous comic business into “Pretty Woman.” It’s as if the questionable levity of men paying top dollar for hookers and those hookers holding out for the much bigger ticket of a wedding ring needed to be gussied up with silly same-sex diversions.

Also wandering around the edges of this love story is an older hooker-mentor-roommate played by the talented Orfeh, who, as sex traffickers go, belongs in an updated revival of “Working.”