More a concept than an actual novel, the 2009 best-seller “Pride and Prejudice and Zombies” is merely the Jane Austen classic (which is in the public domain) with some brief zombie inserts by the writer Seth Grahame-Smith, best known for turning Abraham Lincoln into a vampire hunter.

It’s just a silly title and a dumb passing idea, and now it is a movie written and directed by Burr Steers. Steers, a descendant of Aaron Burr and nephew of  Gore Vidal, previously wrote and directed the literate “Igby Goes Down” before giving the world two Zac Efron vehicles, “17 Again” and “Charlie St. Cloud.”

“Pride and Prejudice and Zombies” is an ominous move to cash-grab status for Steers, who tries to entertain himself here by introducing stray camp elements into the movie. Mr. Darcy (Sam Riley, “Control”) is introduced as a zombie hunter, and in his first scene he is inspected nude by an elderly man who lustfully says that his “pristine young body” has no mark or blemish on it. Steers has cast the surreally beautiful Douglas Booth (“Jupiter Ascending”) as Mr. Bingley, one of the novel’s more eligible bachelors, and he has encouraged Matt Smith (“Doctor Who”) to play Mr. Collins, a fastidious parson in the Austen novel, as a comic fop who seems more likely to kiss Mr. Darcy than Elizabeth Bennet (Lily James, “Cinderella”).

But all of Steers’s queering things up and his attempts to smarten up the zombie mythology, which is doled out to us under the credits, cannot disguise the remorseless dumbness of this concept. The essential problem here is that the story and characters of Austen’s novel feel totally separate from the crass and pandering zombie plot overlay, so much so that some of it just doesn’t make much sense.

If, for example, the Bennet sisters are now ninja warriors who have been trained in China in the art of war, and the world is close to collapse as a zombie apocalypse approaches, then why are they still acting as if marriage proposals are a matter of life and death? The attractive young cast does all it can, particularly the sharp-eyed Riley — who has an unusually gravelly voice and might be trusted to do a real Mr. Darcy someday — but they have been given a hopeless task. 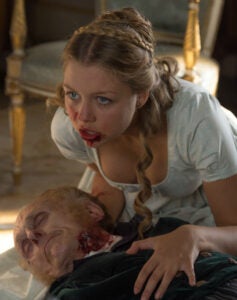 “Pride and Prejudice and Zombies” the book presumably sold so well because it could be displayed and laughed over; there are probably not too many people who have actually tried to read all of it. Making a film out of this idiotic idea just lets you see how threadbare and depressing it is, ultimately. Mrs. Bennet (Sally Phillips, “Bridget Jones’s Diary”) has been made into such a weird low-comic figure here that she actually bites Elizabeth’s hand when her daughter tries to get her to be quiet at a party, and the dowager Lady Catherine de Bourgh (Lena Headey, “Game of Thrones”) is now a feisty zombie bigot who wears an eye-patch. They’ve both been lessened as characters, as has everyone else in the story.

Also Read: 'Cinderella's' Lily James to Cross the English Channel in 'Young Woman and the Sea'

In the 1813 Austen novel, Elizabeth Bennet and Mr. Darcy need nothing but their very sharp wits to do battle with each other in a drawing room, but in this 2016 movie they have been reduced to hand-to-hand combat in that same chamber, and if that’s modernization, then we’d better just call it a day. It needs to be said that actually reading “Pride and Prejudice” or seeing one of the film versions of it remains far more entertaining than seeing the story twisted and perverted for disconnected and aimless little laughs.

This movie is so crushing mainly because it was made by obviously smart people who are trying to dumb themselves down, and there’s nothing more excruciating than that. Let’s hope that we don’t have to see any more of these mash-ups made into movies, for if “Pride and Prejudice and Zombies” feels unnecessary, just think how useless “Sense and Sensibility and Sea Monsters,” a similar mash-up published in 2009, might be.