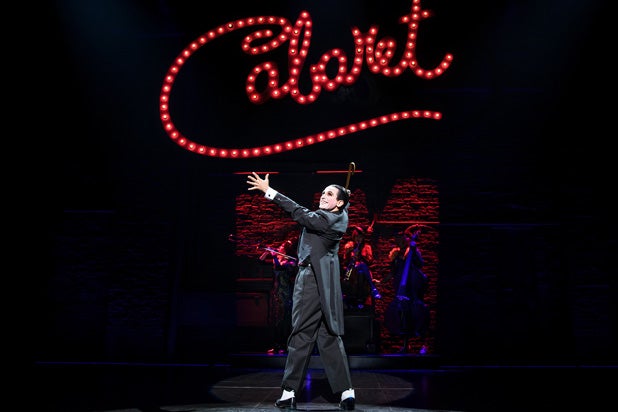 The star of Broadway’s new Harold Prince revue is Stephen Sondheim. Impressive turns are also delivered by Leonard Bernstein and Jerome Kern in “Prince of Broadway,” a musical-theater compilation that opened Thursday at MTC’s Samuel J. Friedman Theatre. “Prince” enters Broadway heaven when these three composers’ work is delivered by an ensemble of eight that’s often vocally stunning. Much less enthralling are those moments that serve up tunes by Andrew Lloyd Webber, Jason Robert Brown and other songwriters.

“Prince on Broadway” is an odd hybrid. Unlike “Ain’t Misbehavin’,” which revolved around the music of Fats Waller, or “Jerome Robbins’ Broadway,” which re-created that musical titan’s extraordinary choreography, “Prince on Broadway” is a grab bag of musical numbers featured in shows that the man of the hour produced and directed, from “She Loves Me” to “The Phantom of the Opera,” or simply produced, from “Damn Yankees” to “Fiddler on the Roof.”

Certainly, a lot of direction goes into a performer delivering a song, but basically what’s you’re watching and listening to in “Prince of Broadway” is a singer belting a song (and do they belt in this show!) written by Sondheim, Bernstein, Lloyd Webber, et al. Prince directs, with help from Susan Stroman, who also choreographs. But that direction repeatedly takes a distant third place to the performer and the song.

Also Read: Thomas Meehan, Writer of 'Annie,' 'Hairspray' and 'The Producers,' Dies at 88

The mash-up of musical styles is most jarring in the overture, arranged by Jason Robert Brown, that pushes John Kander up against Cy Coleman, Charles Strouse up against Jerry Bock. Also dreadful is the book, by David Thompson, which has the cast impersonating Prince between numbers.

These avatars walk on stage wearing Prince’s signature eyeglasses on the top of their heads, which really doesn’t look right when one isn’t bald. What they have to tell us is even more cringe-worthy. Prince has enjoyed an astoundingly brilliant career, but “he” sounds superficial here, if not downright dull.

We’re told, for instance, that Prince got to produce “West Side Story” when the original producer dropped out and he stepped in. He was just that “lucky.” And we’re told that “Showboat” is a classic, in his opinion, because it features a “great” score, book and characters. “Great” does not sum up Thompson’s work here, and that Prince approved these pale memories is disheartening.

The clunky segues between numbers aside, “Prince of Broadway” most resembles a Met Opera gala, where one singer after another comes out in full costume to deliver a big aria. “Prince of Broadway” goes for that same wow factor, with everybody trying to outdo each other. Unlike the greatest hits of opera, though some of these Broadway tunes have been turned into anthems that are merely loud and bombastic, and these include the title songs from “Kiss of the Spider Woman” and “The Phantom of the Opera,” as well as “This Is Not Over Yet” from “Parade.”

Also Read: Denzel Washington to Star in 'The Iceman Cometh' on Broadway

There’s also no visual cohesion. At the Met Gala on May 7, celebrating its half-century at Lincoln Center, the projection designs by 59 Productions created dazzling segues between vocal selections that spanned more than 200 years of opera. With “Prince of Broadway,” set designer Beowulf Boritt keeps it minimal, but at times lifts from the original production, whether it be Boris Aronson’s vertical jungle gym for “Company” from 1970 or the original production of “Show Boat” from 1927, as opposed to the Prince revival from 1994.

In his 1970s heyday with Sondheim, Prince brought a sublime intelligence to the musical theater, that brassiest of art forms. Nothing ever appeared on stage for mere effect, no song ever delivered simply to burst the eardrum. It’s disappointing then to see him not rein in some of this revue’s singers. Emily Skinner delivers a woefully overblown “Ladies Who Lunch,” while Bryonha Marie Parham turns into Brunnhilde to blare “Cabaret.” Parham, a great singer, proves more appropriate on “Will He Like Me?” and “Can’t Help Lovin’ Dat Man.”

By keeping it understated, Brandon Uranowitz finds new ways to delight as the Emcee with “Willkommen” and “If You Could See Her.”

Tony Yazbeck and Karen Ziemba have far too many Broadway credits for a critic to be calling them “breakout” stars here. But each achieves something wonderful and unexpected in “Prince of Broadway.” With her subtle take on “So What?” from “Cabaret” and her hilarious “The Worst Pies in London,” Ziemba plays older than we’ve ever seen her before on stage. She gracefully makes the transition to character parts, and probably just guaranteed herself another few decades on Broadway.

Yazbeck danced up a super-storm in the Broadway revivals of “On the Town” and “Gypsy,” but his “The Right Girl” here begs for a new revival of “Follies” to showcase him. Stroman’s choreography goes way beyond what Michael Bennett did with this number in the original 1971 production, featuring Gene Nelson. She turns it into an extended “The Music and the Mirror” for a heartbroken man, and Yazbeck makes magic with her steps. Stroman’s work hasn’t been this top-notch since her “Contact” days. And so, it’s unfortunate that the ensemble doesn’t dance when singing the title song from “Company,” which Bennett choreographed.

Skinner’s mishap aside, the Sondheim material comes off best in “Prince” because, one, he’s a genius. And two, among his songs are contemplative numbers (“Waiting for the Girls,” “Send in the Clowns,” “My Friends,” and “Now You Know”) that are the antithesis of Broadway razzle-dazzle. In “Prince of Broadway,” as well as the musicals they’re plucked from, they give the audience a chance to catch a breath and think and, of course, feel something other than the hangover of anthem-itis.

While we’re on the subject of Sondheim, why is nothing included in this revue from “Pacific Overtures,” in my opinion, Prince’s most creative work as a director? Could it be that someone didn’t want a Caucasian performer singing an Asian character’s song? It’s odd because Chuck Cooper, a gifted African-American performer, is given Tevye’s “If I Were a Rich Man,” and he delivers it with real distinction.

The vocal pool of talent on Broadway is so much deeper today than it was in the 1970s when I saw all those Prince/Sondheim masterpieces in their original productions. The talented ensemble of “Prince of Broadway” also features fine singing from Michael Xavier (“Being Alive”), Kaley Ann Voorhees (“Tonight” with Yazbeck), and Janet Dacal (“Don’t Cry for Me Argentina”).