“ARE YOU RELATED TO PRINCE?” said the ad that appeared in the Minden Press-Herald days after he died. It was seeking people in Louisiana who may have been related to Prince’s father, John L. Nelson, and listed other known relatives.

It drew a lot of attention in nearby Cotton Valley, pop. 1,009 in the latest census. The small Webster Parish town near the Arkansas line is where Prince’s jazz musician father grew up, before he moved to Minnesota and spawned a musical genius. The ad, and another like it in the Star-Tribune, Prince’s hometown paper in Minnesota, has drawn about 1,000 responses from people who think they may share Prince’s purple bloodline.

“We talked about it a little here at work and whether there’s anyone around that might be kin to him still,” said Sheila Robertson, who works at Bailey Funeral Home, 12 miles from Cotton Valley.

She tactfully added: “I think there might be some who might come out and try to be kin to him.”

The ad was placed by a family-run business of genealogical investigators who will seek a finders fee for any long-list Prince relatives they discover. The Prince estate’s $300 million fortune grows with every mournful download of his music.

Investigator Harvey Morse is chairman of Morse Genealogical Services, a family-run company with the motto, “family tradition, locating families.” His nephew, company president Ari Morse, told TheWrap that the number of people calling, faxing and e-mailing that they may be related to Prince grows by the hour. One woman said she has pictures of Prince at a family reunion.

It’s entirely possible none of the claims are real. 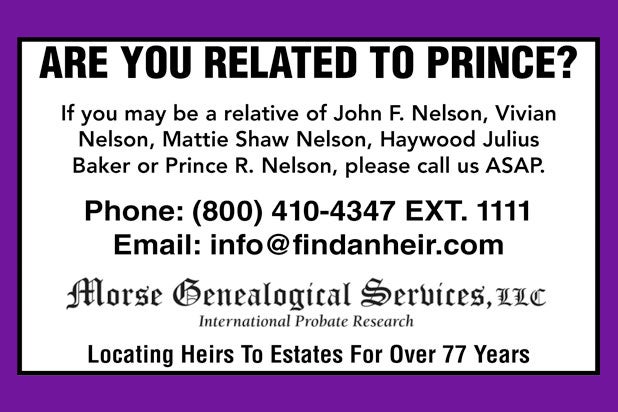 “It’s similar to triage,” Harvey Morse said. “We have the ones that we think have very interesting potential, the ones not so much, the ones that probably don’t have any. It’s nothing that has to be done with any great amount of hurry or fervor. The probate court process is not a speedy one.”

Harvey Morse says Bremer Trust, which is managing Prince’s estate, reached out to him after Prince’s death to see if he would be able to vet claims by people purporting to be relatives. (The singer’s only child, a son, died two decades ago of a rare genetic disorder; he died without a spouse.)

His company can be paid by courts or attorneys for helping rule in or rule out possible relatives. It also gets a cut of any payments to relatives the company discovers — hence the ads. (Bremer Trust declined to comment for this story.)

Who is in Prince’s family tree is now a question for the courts. But an Associated Press breakdown of who’s who helps shed some light on his kingdom.

Prince’s father, John L. Nelson, was born in Louisiana on June 29, 1916, and moved to Minnesota in the late 1940s. He had an off-and-on relationship with Vivian Nelson, and had four children with her: Sharon Nelson, Norrine Nelson, Lorna Lee Nelson (who died in 2006) and John R. Nelson. He then had Prince and a daughter, Tyka, with fellow musician Mattie Della Shaw. (Shaw also had two other sons not with Prince’s father, Alfred Jackson and Omarr Baker.)

Tyka, Prince’s only full sibling, has asked to be appointed executor of her brother’s estate. Their father died in 2001, and their mother in 2002.

The Star-Tribune reported in 2007 that Prince had a half-brother, Duane, who died in 2007 and was survived by a child and grandchild. He had legal trouble, and Prince fired him from working security at Paisely Park and filed for a restraining order against him, the Star-Tribune said.

Tyka did not list Duane as a relative in her court filings and would not explain why, according to The Associated Press.

But if Duane Nelson is not a relative, his survivors cannot be beneficiaries.