Production on Season 2 of “Chucky” is underway, TheWrap can exclusively reveal.

The return of Jennifer Tilly, who voices Tiffany Valentine, was announced last month.

“Chucky” reached 11.6 million viewers in its first season across all platforms. The Season 1 finale aired Nov. 30. 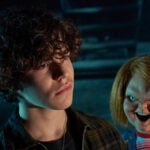 Season 2 will launch on USA and SYFY this fall.