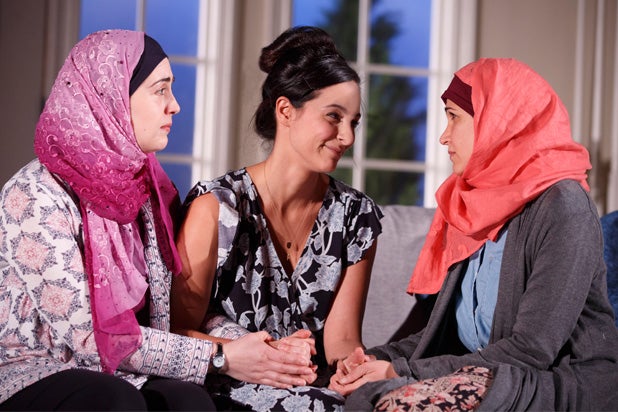 If you happen to be white, straight, male, and/or church-going, a trip to the theater these days can often turn into a masochistic endeavor. Every once in a while, however, a play from a subgenre pops up that can best be described as Minority Infighting. These plays have their unexpected pleasures, letting us know that, at heart, everyone has his or her issues with tolerance. Zayd Dohrn’s new play, “The Profane,” opening Sunday at Off Broadway’s Playwrights Horizons, looks at two very different Middle-Eastern immigrant families living in New York state.

Born in the United States, Emina Almedin (Tala Ashe) and Sam Osman (Babak Tafti) met in college, fell in love, and now want to marry, with the blessings of their respective parents. Emina’s parents, Raif (Ali Reza Farahnakian) and Naja (Heather Raffo), gave up the Muslim faith sometime before immigrating to America. They live in a book-filled apartment in Manhattan; he’s a successful novelist, she performed as a dancer at Lincoln Center. The father pretty much freaks out when, meeting Sam for the first time, the young man refuses his offer of an alcoholic beverage. Sam’s a fundamentalist, and Raif has no interest in his daughter entering that world.

In his first act, Dohrn cleverly lets on that Sam has a secret. He has told Emina his secret, but he doesn’t tell us. Quite often that’s a danger sign. We’re being asked to follow the story, not because it’s of interest but to have some secret revealed.

Following the first act of “The Profane” is also something of a trial because there’s almost no subtext. Obviously there are simmering conflicts between husband and wife, between Emina and her sister, Aisa (Francis Benhamou), but these issues become full blown almost as soon as they are introduced.

Spilled coffee, for example, tells us everything we need to know about the state of the Almedin marriage. Also, many of the performances are pitched too high, as if to compensate for the flatness of the language. It’s not that the Almedins don’t speak like a typical family; it’s just that it’s speech you wouldn’t care to listen to outside your own family.

Act 2 improves because Dohrn introduces Sam’s father, Peter (Ramsey Faragallah). He’s ebullient to the point of overcompensation. What he’s trying to offset or cover up in his White Plains home we can only guess at — this ambiguity is one of the production’s true pleasures — and Faragallah’s expert impersonation of an Arab Rob Reiner is its other reward.

Dohrn’s second act is short, and considering that it reveals the Big Secret, far too much stage time is spent with Peter trying to allay the fears of his wife, Carmen (Lanna Joffrey), and being the gracious host to his prospective in-laws.

Sam’s secret indeed is a humdinger, but after the long build-up its discovery, flare-up, and resolution is so hastily dispatched that it turns risible.

Here and elsewhere in “The Profane” Dohrn shows little ability to gently introduce a conflict, let it simmer, and then delay its climax and resolution. Director Kip Fagan’s shares that penchant for instant gratification. Repeatedly, his actors telegraph and then pounce on the big moment.