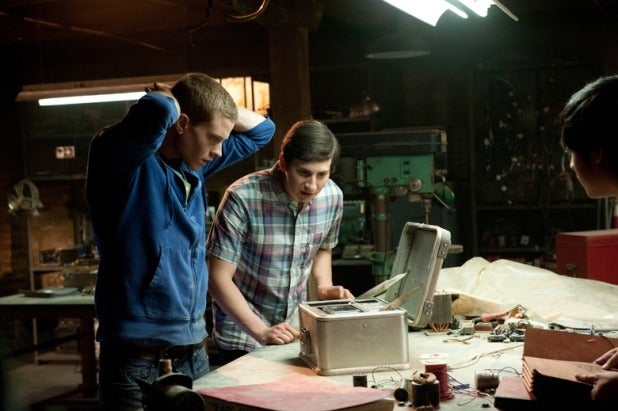 Produced by Michael Bay‘s Platinum Dunes, “Project Almanac” is an agreeable and entertaining teen time-travel thriller that’s equal parts Ray Bradbury and John Hughes, as our five teen leads unlock the secrets of “temporal relocation” and then trample through the delicate space-time continuum in pursuit of riches, repair and romance.  Directed by Dean Israelite in his feature-length debut, the big conceit of the script and story is that what we’re seeing is all footage recorded by the film’s characters throughout their adventures. It’s a stylistic and shooting decision that adds very little and ultimately distracts from the pleasures of the script and performances.

Our nerdy hero, David Raskin (played with no small amount of wit and winning skill by Jonny Weston), begins the film between a rock and a hard place. He’s been accepted to MIT but can’t afford the tuition. While his mom talks about selling the family home, David rifles through the papers and gear his long-dead scientist father left in the attic for inspiration. He and his sister Chris (Virginia Gardner, “The Goldbergs”) find an old video camera in their father’s things with 10-year-old footage of David’s 7th birthday party. Looking over the tape, memories give way to mystery as 2014 David is briefly but clearly visible in a mirror for a split-second in footage from 2004.

Further investigation with the help of Chris, fellow tech-head Adam (Allen Evangelista, “The Secret Life of the American Teenager”) and the funny, flip Quinn (Sam Lerner, “Suburgatory”) leads to a secret set of prototypes and blueprints in the basement, hidden by David’s father. “I can’t build a time machine in my basement,” David sputters as the situation dawns on him. Adam re-frames the discussion: “Look at the tape. I think you already did.”

“Project Almanac” is decidedly and delightfully self-aware, like when Quinn, breaking into his own house to test a little cause-and-effect hijinks, asks “Have any of you seen ‘Looper’?” Andrew Deutschman and Jason Pagan’s script is less like the time-travel classics it references by name or resembles in nature (there’s a touch of Shane Carruth‘s brilliant “Primer” in here, with the basement lab and a focus on soldering) and more like the recent “Final Destination” films.

Much like that horror-thriller franchise, “Project Almanac” suggests it’s not smart to mess with the way things should be, especially after David starts going back in time again and again, first to win the heart of new-to-the-clique cool girl Jessie (Sofia Black-D’Elia, “Gossip Girl”) and then to correct all the damage his seemingly minor meddling in the name of young romance has wreaked on the fragile fabric of reality. But even with all the teen angst and temporal alterations, the film stays fleet, funny and fast, especially as our leads figure out, through trial and error, how they can take advantage of their new abilities in ways large and small.

Also Read: This Is Not a Test: ‘Purge 3′ In the Works at Universal, Blumhouse

Even with all of the vertigo-inducing hand-held camerawork and special effects magic that goes into the film’s time-travel sequences, it’s worth noting that the characters in it all act like real teens. In an extended sequence, our fivesome use their god-like power to leap through time — so they can see Imagine Dragons at Lollapalooza. With VIP passes.

Israelite’s direction is good enough that you have to wonder how much better the film would have been if someone had let him shoot the film from a tripod and not go through all the unnecessary artifice of a constantly-moving camera. But you believe the cast as friends, and Weston (“Kelly & Cal,” “Chasing Mavericks”) is a great lead, giving a smart and emotionally aware performance that drives all of the film’s figure-eight looping through the past.

In theory, “Project Almanac” should be a dud — an all-too-familiar riff on time travel, a shooting style that actually obscures the pleasures of the performances and the script, and a cast of relatively new faces in a first-time feature directorial debut. But in practice, “Project Almanac” has enough heart and brains to keep it steady even as the camera isn’t, and its wires-and-widgets variation on “The Monkey’s Paw” is very much informed and improved by the charm and capabilities of its young cast, making for a fun, fast and appropriately grim cautionary tale.