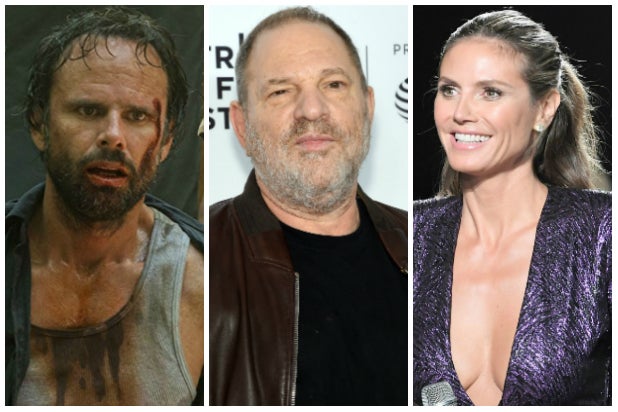 Now that The Weinstein Company’s has filed for bankruptcy, what will become of the series produced by Harvey and Bob Weinstein’s once-thriving TV division?

Before the sexual harassment scandal that forced CEO Harvey Weinstein from the company in disgrace, the New York-based studio had a diverse array of shows on the air and in development. But networks have since scrambled to cut ties with the tarnished company, leaving little on the line as the company seeks protection from creditors under Section 363 of the U.S. Bankruptcy Code.

For starters, the Weinstein Company was a passive producer on History’s “Six,” which is set to return unaffected for Season 2 on Memorial Day 2018. The Navy SEAL story, which recruited Olivia Munn for its sophomore run, was produced in-house at A+E Studios. In other words, a TWC bankruptcy won’t change a thing for Barry Sloane and the boys.

The situation is much more serious for “Project Runway,” which is pretty much TWC’s crown jewel of its dwindling TV business.

“Project Runway: All Stars” is currently airing original episodes, and there’s another upcoming season already in the can — both were shot before all of the sexual assault and misconduct allegations against Weinstein became public. The two runs also still star Harvey’s estranged wife, fashion designer Georgina Chapman, who judges on the second-chance series.

As for regular “Project Runway,” shooting any additional seasons is very much up in the air. The show would typically start casting a few months from now, but the series’ future hangs in the balance because of TWC’s financial and PR problems. Everyone at the A+E-owned Lifetime is pretty much just waiting to see what happens with the bankruptcy process.

In other words, the Harvey mess could very much kill the flagship show before another Fashion Week, even though the disgraced mogul wasn’t hands-on (for once). TWC executives Barbara Schneeweiss and Patrick Reardon were the ones who ran “Runway,” but they are sidelined until there’s more resolution about the company’s future.

Other networks have already taken steps to distance themselves from the embattled studio.

Viacom relaunched Paramount Network relaunched in January with the Michael Shannon limited series “Waco” — which was developed and produced by TWC — and it has another new TWC-produced series, the upcoming Kevin Costner drama “Yellowstone,” due to debut in June.

However, the network has since cut ties with the production house altogether, scrubbing Harvey Weinstein and TWC from the credits of both shows.

Paramount Network president Kevin Kay has previously suggested that a reconstituted TWC could regain its onscreen credit over time — but that presupposed that either show would actually be renewed.

Amazon Studios also had two high-profile projects in the works with Weinstein at the time of the initial scandal — an untitled drama from David O. Russell with Robert De Niro and Julianne Moore attached to star, as well as “The Romanoffs” from “Mad Men” creator Matthew Weiner.

The Russell project, which had been given a two-season order, was scrapped entirely in October (earning TWC a $2 million lawsuit from the show’s producers), while Amazon took over full control of “The Romanoffs,” which will hit the streaming service later this year without any involvement from TWC.

The Weinstein Company also still has a credit on the MTV adaptation of the horror franchise “Scream.” Though it’s been well over a year since the series last aired, the network does have a third season of the series that has yet to be scheduled.

Produced by TWC’s genre label Dimension TV in conjunction with Queen Latifah’s Flaver Unit Entertainment, the entire six-episode season has been shot and will air regardless of TWC’s future.

Oh, and if you were wondering about the TWC-produced VH1 reality series “Mob Wives,” yeah, that show sleeps with the fishes.