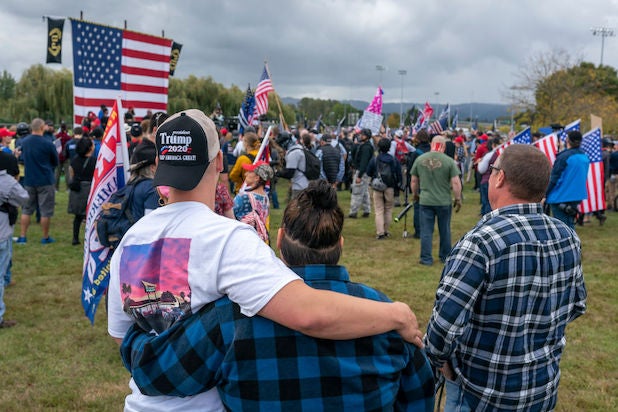 The Proud Boys, an FBI-designated extremist group with ties to white nationalism, lost its web host for the group’s website and online store following efforts from advocacy group Color of Change.

“After a heads up from Color of Change, we notified one of our customers — a website hoster — who then took action. The websites in question were not Google Cloud customers,” a Google Cloud spokesperson told TheWrap on Friday.

As of Friday evening, however, the extremist group appears to have gotten a new host for its website, but the online store is not currently taking orders and a note to online customers says that the “migration to a new webhost has taken longer than anticipated.”

Still, Rashad Robinson, the president of Color of Change, praised Google for its “actions to block the Proud Boys website and online store” but called on “Google’s peers to follow suit.”

“Big Tech companies have the power and resources to take meaningful action, but instead turn to last-minute, knee-jerk reactions that often fail to prevent further violent harm or even death,” Robinson said in a statement. “When you allow domestic terrorist groups, right-wing militias, and violent hate groups to recruit, organize, and mobilize on your platform, there is no longer a question of whether your company cares about Black people and other marginalized communities — YOU DON’T.”

He added, “Tech companies must enact and enforce a proactive, aggressive approach to stop the violent, hateful activity on its platforms — it cannot continue to fall on advocates, as it has for far too long,” Robinson continued. “Anything short of creating the policies and enforcement mechanisms necessary to proactively keep these hate-fueled groups off of tech platforms will only lead to more dangerous outcomes.”