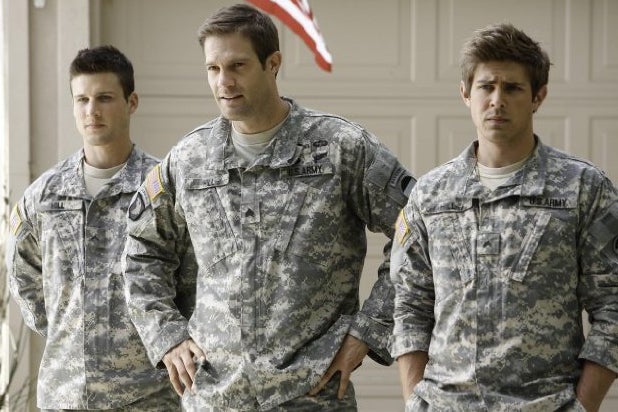 New Fox series “Enlisted” is facing some of the same questions about the appropriateness of its humor as another new Fox comedy, “Dads.”

“Enlisted” is a silly portrayal of three brothers in the military posted at a Florida-based Army Rear Detachment unit. Their platoon is filled with ne’er-do-wells and soldiers unfit for combat, whose stateside days are filled with menial tasks as their more competent peers are deployed for war.

Show creator Kevin Biegel (“Cougar Town,” “Scrubs”) described Rear D this way to TheWrap: “They are the guys who take care of the base. Sometimes their job is ridiculous, sometimes it’s the heaviest thing in the world. Some days you’re mowing lawns, some day you’re telling someone their loved one has died.”

It’s a real assignment in the armed forces, and — at least early in the season — it is depicted as an unglamorous and somewhat shameful designation, in a unit comprised of men and women who could never have possibly made it through boot camp.

Some people, military veterans and civilians alike, have expressed disapproval to Biegel and his cast about portraying the military in that light. He understands, but thinks the complaint is unfair.

“I think there’s a certain segment of people who automatically see a TV show about the military and say, ‘You can’t do that,'” he told TheWrap. He added, “It’s horseshit. You can tell a story about anything.”

Geoff Stults, who plays lead character Sgt. Pete Hill, told TheWrap that he isn’t shocked about some of the backlash: “It’s inevitable, people don’t like to be made fun of,” Hill said. “There’s a reason that the U.S. Army hasn’t officially endorsed the show — they don’t want to look silly.”

“Dads” was criticized for different reasons. It has fielded criticism from an Asian-American group over stereotypical jokes in its opener.

Like the “Dads” team, Biegel (left) swore that if viewers give his show a chance, they will find depth to balance out the surface gags: “We’re not doing the typical goofball approach to this,” Biegel insisted.

The failed soldiers may even head to a war zone, Biegel said. If so, the staff would handle with care. “We’d have to do our homework and make sure we really get it right,” Biegel said. “We’d never do anything if we feel it was disrespecting or making fun of or mocking.”

War or no war, Biegel’s show will set aside the silly approach for serious topics at times. One plotline includes Hill dealing with Post Traumatic Stress Disorder.

“There are a few episodes where it’s a little heavier than the other ones,” Biegel said. “I want to gain the audience’s trust before we go to these heavier place.”

As a showrunner, Biegel sees one big advantage to the military setting: “It’s a very natural way to have people come in and leave show.”

And Biegel does not lack for confidence in his work, or his work ethic, saying of “Enlisted,” “It’s got to be the most ambitious show on television. There are huge things that come up during the rest of the season.”