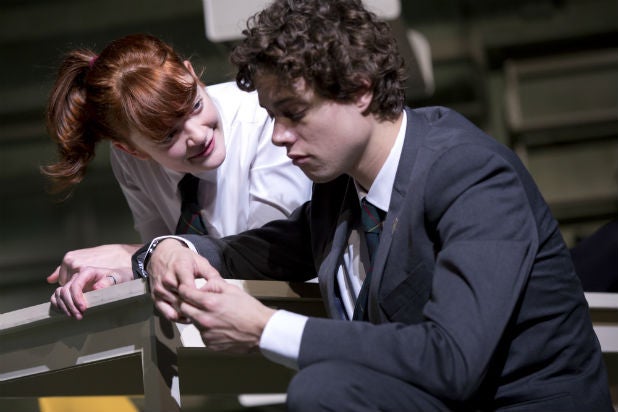 Anyone who’s a star in high school and considers it a high point of his life is destined to be a failure — or maybe just miserable. Bennett is that kind of teenager: sexy, cocky, and thoroughly obnoxious except to those girls who are sleeping with him. Will Pullen fully realizes the role, and then some, in Simon Stephens’ new play “Punk Rock,” which opened Monday at the Lucille Lortel Theatre in New York under the auspices of MCC. If only Bennett lived to discover that his best years were in such short supply.

Stephens, of course, also wrote the current Broadway hit “The Curious Incident of the Dog in the Night-Time,” about another troubled British youth on the verge of his losing his way. Stephens is a former school teacher, and so he must know about what he writes. Some of the British slang doesn’t translate, but his grasp of the young hormones that can create a “Lord of the Flies” situation does. Apparently, student hierarchies aren’t that much different in the U.K. than in the States, only more so.

Bennett is the poster boy for the Bully Project, and the six other student-characters are his victims. “Punk Rock” also features two other characters, a psychiatrist (David Greenspan) and Bennett’s much younger sister (Sophie Shapiro), which is a real relief for any theatergoer who has OD’d on the recent surfeit of skimpy two- and three-hander plays. Stephens has written a living, breathing, fighting community, one that seemingly tolerates Bennett’s malevolent tirades, theatrical humiliations, dropping trou, spitting, kissing, fondling, baiting, and just plain harassing anyone in sight. It’s all more than a little over the top, even for the heightened reality of a play, when it becomes apparent, maybe, that we’re meant to see Bennett from the perspective of another student, William (Douglas Smith), who, as it turns out, is much more deeply at odds with the world around him than the autistic boy at the center of “Curious Incident.”

Then again, maybe not. Stephens keeps the terribly sensitive William out of the library when he reveals the most likely motivation for Bennett’s abusive behavior, a motivation that was old gothic stuff even for Jackie Susann. Between scenes, of which there are many, director Trip Cullman has the other students (Colby Minifie, Lilly Englert, Pico Alexander, Annie Funke and Noah Robbins) run around and sometimes don masks from a James Ensor painting. Loud rock music blares, per the instructions in Stephens’ script, a flourish that even Neil LaBute has finally retired.

If it’s possible to cast to true to type, Cullman may be guilty of having his young actors announce too early their respective character. For example, Robbins is small and nerdy-looking, so he plays the confident intellectual Chadwick, who gets to deliver a long speech about the imminent end of the world, which may or may not be — like Bennett’s overall ill will — a product of William’s imagination.

As the troubled William, Smith plays the last scenes first, giving his character little room to grow — or disintegrate, as the case may be. He may relax into the role in future performances, if it’s possible to relax when you’re at the center of this emotional vortex.