Peacock has axed the “Punky Brewster” revival after one season.

The series, which saw Soleil Moon Frye reprise her role from the 1980s NBC sitcom of the same name, debuted with its 10-episode first season back in February. The show picked up with Frye’s character Punky as a single mother of three trying to get her life back on track after separating from her husband and taking in a foster child. 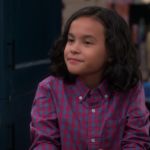 Steve and Jim Armogida were writers and executive producers on the series from UCP and Universal Television. Frye executive produced alongside original series creator David Duclon and Jimmy Fox of Main Event Media.