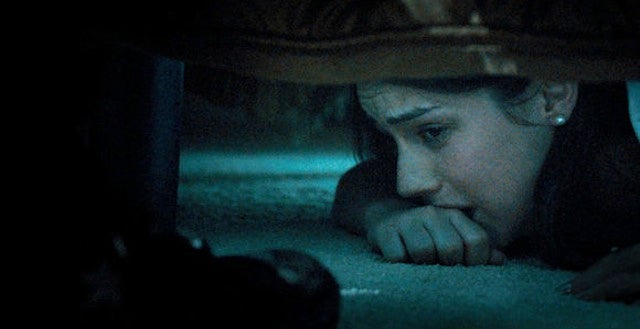 "The Purge" is a standard issue home-invasion movie drizzled with a thin glaze of sensationalism thanks to a provocative setup. The movie’s front cover may be enticing, but the contents prove all too familiar.

The horror thriller is set in the near future, in 2022, when a group collectively referred to as the “New Founding Fathers” now guides the country. These leaders have decreed that, one night a year, citizens can roam the streets to perpetrate mayhem and murder in a collective spasm of rage and free-for-all vigilantism. On the designated night of the Purge, anything goes between 7 p.m. and 7 a.m., as evidenced by a montage of grainy news videos in which victim after victim is set upon by a single attacker or a group wielding knives, machetes, bats or guns.

“The Purge contains societal violence to a single evening and lets us release the aggression we all have inside us,” a TV commentator pontificates. Thanks to the Purge, the nation’s unemployment rate is 1 percent and, it’s hinted, the ranks of the homeless and other so-called undesirables have been diminished.

Also read: 'The Internship' Review: Crashing Google Not Quite as Funny as Crashing That Wedding

That’s the most provocative part of the movie and holds the promise that writer-director James DeMonaco (“Little New York”) might actually want his movie to be about something, offensive though that something might be. But no, once the main characters are introduced and the plot kicks in, “Purge” is pretty much same-old-sameold for a home-invasion movie.

The home in question belongs to James Sandin (Ethan Hawke), a hail-fellow-well-met salesman who specializes in home protection systems. He has sold a system to nearly all the neighbors in his upscale suburban development, allowing James and wife Mary (Lena Headey) to build a large new addition onto their house.

The evening of the Purge, just before the clock strikes 7, James activates the security system in his own home, an elaborate setup involving metal window covers, cameras, monitors, and more. Then he, Mary and their adolescent daughter (Adelaide Kane) and tweener son (Max Burkholder) park themselves in their well-appointed house to wait the night out in comfort.

Their smug sense of security doesn’t last for long. Marauders with various motives breach the house’s protection system and things quickly go from bad to way, way worse for the Sandins.

Also read: 'This Is the End' Review: Night of the Living Judd Apatow Ensemble

If you're a young moviegoer who hasn’t already seen a dozen or more similar, better home invasion films (think "Panic Room," "Funny Games" and "Straw Dogs"), then you might find "Purge" scary and disturbing. But for older, more experienced filmgoers, it hits all the expected beats without in any way making them seem fresh or revitalized. Even the supposedly surprise twist toward the end can be seen coming a block or two away.

As for the cast, it’s not likely any of its members will include this in their career-highlights reel. Hawke brings a gleeful bit of Babbitry to his portrayal of the self-confident salesman and Headey gets to revisit the notes of maternal toughness she displayed so convincingly on TV’s “Terminator: The Sarah Connors Chronicles.”

Years ago, after seeing a pretentious Broadway play, Tallulah Bankhead supposedly muttered, “There’s less to this than meets the eye.” It’s an apt review for “Purge.”