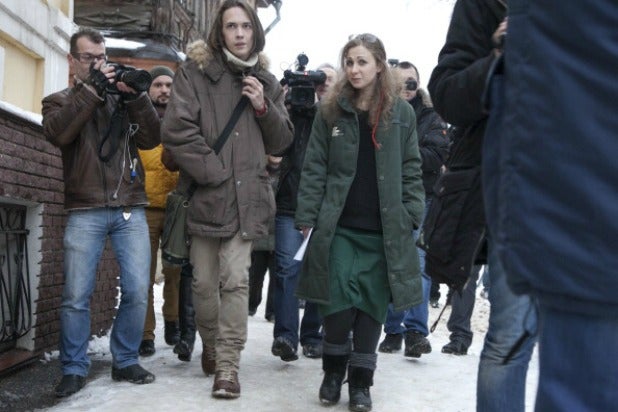 Two members of the punk band Pussy Riot who were serving a two-year jail term after giving a performance critical of Russian President Vladimir Putin have been released from prison, two months early.

The early freedom for Maria Alyokhina and Nadezhda Tolokonnikova means their release will not occur around the same time as the 2014 Winter Olympics in Sochi in February. Releasing them then could have drawn attention to Putin’s human rights record at a time when his country will be the focus of international attention.

“I think this is an attempt to improve the image of the current government, a little, before the Sochi Olympics — particularly for the Western Europeans,” Alyokhina (pictured) told the New York Times in an interview. “But I don’t consider this humane or merciful. … This is a lie.”

She also said she didn’t ask for early release: “I would have sat here until the end of my sentence because I don’t need mercy from Putin.”

The release was approved last week when Russian lawmakers backed a sweeping amnesty law announced by Putin. The Russian government said the amnesty was to mark the anniversary of Russia adopting its post-Communist constitution in 1993. The women also qualified for early release because they have young children, the government said.

Tolokonnikova’s husband, Pyotr Verzilov, was not impressed by the early release.

“Two months out of the almost two years that the girls have served is not much,” he told CNN. “So the effect of this amnesty for Maria and Nadezhda is not really felt.” He said he thought the release was an effort to burnish Putin’s image.

in 2012, Pussy Riot performed a “punk prayer” that criticized Putin, who was then the prime minister, at a Russian Orthodox cathedral. They were found guilty of hooliganism.

A third member of the group, Yekaterina Samutsevich, got her sentence overturned on appeal.