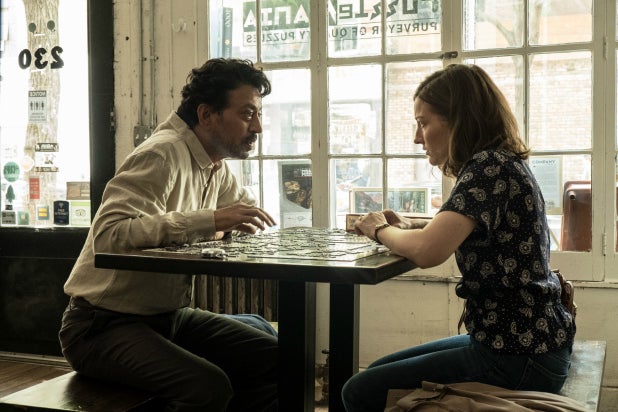 For some people, a hobby is a way to pass the time. For others, it’s the only way. You can see that divide in many movies, where a character’s personal preoccupations are either a charming quirk, an obvious metaphor, or — in the small but enjoyable hobbyist subgenre — secretly the most important part of their lives.

Marc Turteltaub’s “Puzzle” is a quiet, zen-like story of a stifled housewife named Agnes, played by Kelly MacDonald. She exerts all of her energy taking care of her husband Louie (David Denman, “Outcast”) and their two sons. Agnes has got their routine down to such a science that she even knows when Louie’s alarm is about to go off, without checking the clock first. She decorates and caters her own birthday party and spends the whole night working so they can have a good time. It’s not an exciting life.

So it would seem that a jigsaw puzzle, a decent but not particularly thoughtful birthday present, would be just another humdrum addition to Agnes’ home. And then she opens it, assembling it in what seems like record time. Then she puts the pieces back, goes about her routine, and assembles the puzzle again.

“Puzzle” is the story of a woman who cares so much for other people that she never seems to care for herself, and of the unexpected way that jigsaw puzzles — a lazy Sunday pastime, for most people — make her feel whole again. For the first time in a long time, maybe ever, Agnes has her own interests, and an undeniable talent.

Turteltaub’s direction finds drama in quiet moments: He allows his actors play their internal struggles as quietly and realistically as possible, letting composer Dustin O’Halloran (“Lion”) do a lot of the heavy lifting. His score promises early on that Agnes’ puzzle obsession will lead to personal fulfillment, the kind that borders on magic.

Watch Video: 'Doctor Who' Trailer: 'All of This Is New' to 13th Doctor Jodie Whittaker

So it’s a bit surprising to find that “Puzzle” takes Agnes not on a simple voyage of self-discovery but instead on a complex journey into doubt. She responds to a posting at a puzzle shop that reads, “Champion desperately seeking puzzle partner,” and finds herself alone in the house of a rich inventor named Robert (Irrfan Khan), who spends his own lonely days watching 24-hour disaster coverage on the news.

Robert doesn’t live a terribly riveting lifestyle himself, but the mere exposure to other ideas makes Agnes suddenly, demonstrably uncomfortable in her own home. Arguments break out, lies filter their way into their conversation, and it all seems eerily genuine. “Puzzle” brushes against the profound — and then it gets shy about it.

The understated storytelling of Oren Moverman (“Love & Mercy”) and Polly Mann’s screenplay has the unfortunate side-effect of highlighting what could, in a more eventful film, have been minor deficiencies. When “Puzzle” does plunge into heavy drama, it feels almost like a betrayal of tone, and Louie’s suddenly harsh, violent lines of dialogue like, “Who’s filling your head with all these new ideas?” and “You know what my father would have done to my mother in this situation?” seem like they’ve been air-dropped from a cargo plane carrying a very different, more melodramatic storytelling style.

And although “Puzzle” isn’t a film about plot, what plot there is moves slowly enough that it’s easy to get distracted when it doesn’t come together well. We are told in no uncertain terms that Agnes is a stifled genius, and yet the film dedicates an entire scene to her having to phone a friend just to find out where to buy puzzles. The plot requires her to leave her close-knit neighborhood in order to meet Robert, but suffice it to say that an elegant solution to that problem eluded the filmmakers.

Whatever successes or deficiencies can be found in “Puzzle,” special attention must be paid to Kelly MacDonald’s superb performance. She captures the inner brilliance of someone who looks, to the rest of the world, as though she’s deeply uninteresting, without being so obvious about it that everyone else in her world seems like a moron. Her gradual evolution into a complicated, frustrated person who makes the hardest choices of her life is a small but consequential inspiration. To say that it’s her best performance would do the rest of her exceptional career a disservice, but she brings the richness and grace of her finest work to Agnes, and she’s instrumental to the film’s understated success.

“Puzzle” may not be the most labyrinthine of dramas, but solving it is undeniably satisfying. It’s a remake of Natalia Smirnoff’s 2009 film “Rompecabezas” and yet it doesn’t feel like an empty rehash. It’s a kind and thoughtful drama that respects its characters and has faith in them, letting them live and breathe and find the meaning in their own lives.