After hearing about their new company, Fake Empire, TV MoJoe caught up with "Gossip Girl" creators Josh Schwartz and Stephanie Savage. We asked a few questions; they answered jointly via e-mail. (No clue whether they ate s’mores and braided each other’s hair as they answered.)

How does this new deal change what already seemed like a pretty solid relationship between the two of you?

This takes a relationship that’s developed over the last several years and formalizes it into a partnership. We have had a unique relationship in that we’ve played many different creative roles in each other’s careers, but now it gets to be in the service of one company and one brand moving forward. 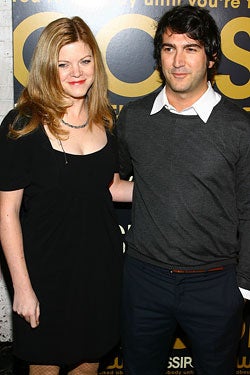 Stephanie, you’re not a producer on "Chuck." Will you become more involved in that show now? Or is that considered a pre-existing condition not covered by the new agreement?

"Chuck" will live outside Fake Empire, but anything in development currently would become a Fake Empire project in success. (Note: Stephanie totally cried when Chuck didn’t get on the train in Prague with Sarah.)

Both of you are into movies, and Fake Empire will develop beyond TV. How active will the company be in film?

Fake Empire will definitely have an active focus in features. We’ve built our careers at WBTV and met doing television, so it was important to plant the company’s flag on the TV side first .

Will you be exclusive to each other in all projects going forward?

That is the goal. If we were offered to write something or direct something individually and there were a number of players already involved, we’d have to figure that out. But most of the stuff we end up doing, we self-generate anyway (like "Bright Lights, Big City".)

So did you have to get permission from The National to use the name of their song as the title of the company? Or did they owe you for all the exposure you’ve given them in "Chuck" and "Gossip Girl"?

We like the name, love the song. But also like that as a company name it’s tongue-in-cheek.

What names did you reject?

Do you ever have to fight the urge to email the lovely Dawn Ostroff with a simple "toldja!" re: the decision to pick up "Melrose Place" rather than the "Gossip Girl" spinoff?

Is there a creative or business partnership out there that you’ve admired and would like to emulate? Like say, Aaron Spelling and E. Duke Vincent?

Because we have played writer to the other’s producer, or producer to the other’s writer, or produced someone else’s writing, we feel the make-up of this company is unique and unlike other companies. We’re just looking to build the best version of our own idea for what a company is. It will be a creative place which will be writer-driven.