“Quantum Leap” is officially back. The reboot of the beloved sci-fi series has been ordered to series, NBC announced on Thursday.

Seong’s character is described as a “spiritual successor” to Beckett. Per NBC, the character is “both a scientist and man of faith. He’s a world-renowned physicist working on a time travel project known as Quantum Leap.” 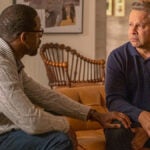 Hudson will play Magic, a military veteran and head of the time travel project at Quantum Leap.

While fans fervently hope Bakula will be back in some capacity, no announcement about his involvement with the new version has been made. He was announced to lead Shaun Cassidy’s NBC pilot “Unbroken” in March.