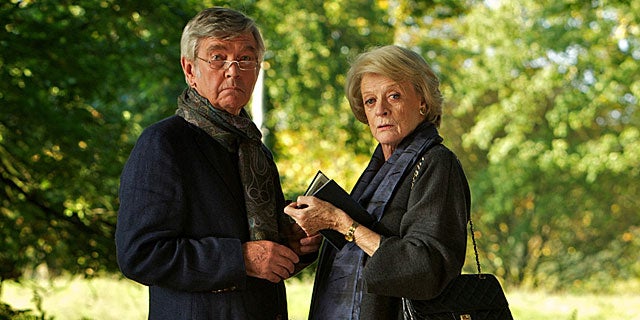 Age has its privileges. And one of those is to choose to appear in, and seemingly have a splendid time doing it, a vehicle as slight as “Quartet.”

Maggie Smith, she of the raised eyebrow and smiling sneer, stars in “Quartet,” an appealing but predictable comedy set in an old folks home for retired musicians in England. The film marks the honorable directing debut of Dustin Hoffman, now 75 — making good on the adage that it’s never too late. (The film opens in Los Angeles for a week on Friday, Dec. 7, for an Oscar-qualifying run, and then will be released in New York on Jan. 11, and later elsewhere.)

Screenwriter Ronald Harwood adapted the movie from his own play, which in turn was inspired by “Tosca’s Kiss,” a 1984 documentary about a retirement home for aged opera singers in Italy.

The setup for the film is simple: Jean (Smith), an opera diva, moves to Beecham House, a lovely old mansion on stately landscaped grounds. She is surprised to discover that her fellow residents include Reggie (Tom Courtenay), her ex-husband, an opera singer whom she hasn’t seen since they parted badly many years ago. Also living at Beecham are other longtime colleagues, Sissy (Pauline Collins), an often-dotty sweetie, and Wilfred (Billy Connolly), a cheerful rogue.

There are essentially two main plot threads here, which overlap. Jean and Reggie warily circle each other, their emotional bruises from the past still evident even as they obviously still harbor strong feelings for each other. At the same time, Reggie, Sissy and Wilfred try to recruit a reluctant Jean — “I can’t insult the memory of who I was,” she says — to perform with them, singing a quartet from Verdi’s “Rigoletto,” at an annual benefit for the retirement home.

The movie touches, mostly jokingly, on the indignities of growing old. “Quartet” is the happy face antidote to “Amour,” director Michael Haneke’s harrowing portrait of the ravages of aging, which won the Palme d’Or at this year’s Cannes Film Festival and opens in the U.S. on Dec. 19.

Occasionally, though, “Quartet” manages to add a little bite to its colorful geezers routine, as when Jean complains to Reggie, “My gift has deserted me,” and he wisely tells her, “It’s called old age. Let go.”

The pleasures here are both in the performances and the splendid music. No one can land a tart one-liner like Smith, and she goes about it gleefully in “Quartet,” insulting everyone in sight while looking more than a little pleased with herself. As Reggie, Courtenay is affecting, showing a man who has made a certain peace with his life and place in the world.

Too insubstantial in the end to serve as a full meal, “Quartet” is a diverting dessert, a crème brulée, if you will, whose slightly bitter, burnt crust can’t mask the sweet, abundant goo that lies beneath.