“Lovecraft Country” and “The Underground Railroad” also won multiple awards, with the former show taking acting honors for Jurnee Smollett and Jonathan Majors and the latter winning in the Best Limited Series and Best Director category for Barry Jenkins.

Robin Thede’s “A Black Lady Sketch Show” won the award for Best Comedy, while “The Equalizer” won in the Best New Show category. “Sylvie’s Love” was named Best Movie, while the Best Docuseries category was a tie between HBO’s “Exterminate All the Brutes” and Netflix’s “High on the Hog: How African American Cuisine Transformed America.” 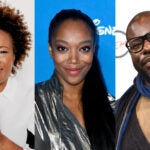 Overall, HBO won four awards, Amazon Prime Video won three, OWN won two and CBS and Netflix won one each. The awards were chosen by a jury drawn from the AAFCA.

“We are most hopeful that the vast array of offerings this year point to a permanent shift in the quality and depth of storytelling capturing the Black experience on television,” said AAFCA co-founder and president Gil Robertson in a statement. “It’s a robust slate that we believe is reflective of a new normal regarding diversity and inclusion for TV.”

In addition to the Impact Award for “Queen Sugar,” previously announced special awards will be given to Steve McQueen, Wanda Sykes, Naomi Ackie, Michaela Coel, HBO/HBO MAX and “Lupin.”

The awards will be handed out at a private ceremony on Aug. 21 hosted by Yvette Nicole Brown and taking place outdoors at the California Yacht Club in Marina Del Rey. Only fully vaccinated guests will be allowed to attend.