“Queer as Folk” returns to screens with a new installment June 9 and it will come paired with a warning.

TheWrap has learned the show will carry the following card onscreen: “‘Queer as Folk’ is a fictional series about the vibrant LGBTQ community in New Orleans rebuilding after a devastating tragedy.  Some viewers may find elements of the first episode distressing as it depicts the aftermath of a shooting.  Our hearts go out to all of those affected by these senseless tragedies.”

The new version of the show, from creator/writer/executive producer and director Stephen Dunn, follows a group of friends in New Orleans, “whose lives are transformed in the aftermath of a tragedy.” 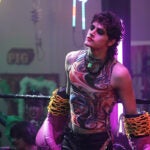 The trailer for the series hinted that the show would follow the characters following a tragic event like what happened at Pulse nightclub in 2016. News of the warning card follows the school shooting in Uvalde, Texas, that left 21 people dead, including 19 children.

After the Uvalde, Texas, incident, CBS pulled the season finale of “FBI,” which involved a student being suspected in a school shooting.

All episodes of “Queer of Folk” begin streaming June 9 on Peacock.