I’m probably the only person who cares about this, but I’m going to write about it anyway.

Quentin showed up to The Weinstein Company’s party at Soho House on Saturday night to celebrate with the studio that made a hit of his last opus, “Inglourious Basterds.” 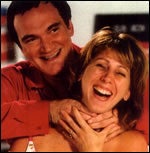 I’d seen the film at the Cannes Film Festival, where for some reason it did not initially win a particularly enthusiastic reception. I was among the few who passionately loved the film early on, writing that Tarantino’s work seemed newly mature.

The film had “scenes filled with dramatic tension, performances with depth and humor, rich and witty scoring choices, multi-lingual dialogue that Tarantino still stamps as his own, and knowing nods at cinematic history and the power of the medium he loves so well.”

It turned out that Tarantino had seen this, and it threw him for a loop.

Quentin and I hadn’t spoken since the publication of "Rebels on the Backlot," a book that takes an honest look at six of the most important filmmakers of the 1990s, Tarantino chief among them. (Photo at left taken on the day I interviewed him in 2003.)

I had interviewed Tarantino for the book, but never spoken to him since. I had taken that as a sign that he did not approve of my assessement of his career.

No surprise there. When I (re-)introduced myself on Saturday night, Quentin said he never read the book because of what he’d heard about it – that it made him look bad.

For the record: I am a fan of Quentin Tarantino, and of all the directors in “Rebels on the Backlot.” It’s why I chose to write about them; to me, they made the defining flms of the 1990s. They made the enduring films that we will see and re-see, and they did so despite the best efforts of the corporate-owned studios.

Tarantino knew that. But he said he had never been told I was writing a book, he thought I’d paid to interview people who talked about his past. I didn’t know what to say to that. As a journalist, my aim is to tell the real story. I do not pay for interviews, or pay others to make interviews happen, either with his mom, or his childhood friends or his recently-passed, longtime manager Cathryn Jaymes.

It’s hard to tell the truth in Hollywood.  As a journalist, my aim is to tell the real story, and not all the truths I learned about Tarantino were pleasant. He chose not to discuss them with me any further. And he still doesn’t want to discuss it further.

"It’s none of your business," he said sprinkling in a bunch of Quentin-ish expletives.

So that’s where we’ve left it, and I am grateful for that.

“You are annoyingly charming,” he finally conceded, agreeing to shake hands on “détente.”

Quentin, if I may, so are you – and maddeningly brilliant.

Best of luck at the Oscars.