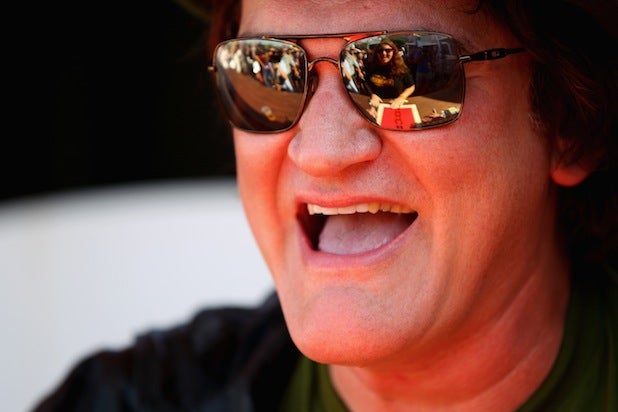 Quentin Tarantino has declared war on Hollywood agencies after his Western script “The Hateful Eight” began circulating around Hollywood, the Oscar-winning filmmaker revealed in an extensive interview with Deadline.

“I’m very, very depressed. I finished a script, a first draft, and I didn’t mean to shoot it until next winter, a year from now. I gave it to six people, and apparently it’s gotten out today,” Tarantino told Deadline. “I like the fact that people like my shit, and that they go out of their way to find it and read it. But I gave it to six motherfucking people!”

The title for the director’s latest opus was revealed in December, with Deadline reporting that Tarantino was courting two-time Oscar winner Christoph Waltz and “Nebraska” star Bruce Dern for lead roles. On Tuesday, Tarantino told Deadline that Waltz never received the script (neither did Tarantino favorite Samuel L. Jackson), which he personally handed to Dern and “Reservoir Dogs” stars Michael Madsen and Tim Roth, as well as “Django Unchained” producer Reginald Hudlin and two other people.

Harvey Weinstein has distributed all of Tarantino’s movies and the director had just started talking to the mogul about how they were going to make the movie. It’s unclear whether Weinstein or anyone at the Weinstein Company had been given the script.

Feeling betrayed by the script leak, Tarantino has decided to shelve the project and publish the script before the end of the year, as he’s preparing to meet with publishers.

Tarantino will move on to another project and will likely write a part for Dern in that movie as well. TheWrap has heard that Tarantino has been considering a prison movie of sorts and has immersed himself in the details of the Robert Blake case, though a representative for Blake told TheWrap several weeks ago that Tarantino has not reached out to the former “Baretta” star, who was acquitted of killing his wife.