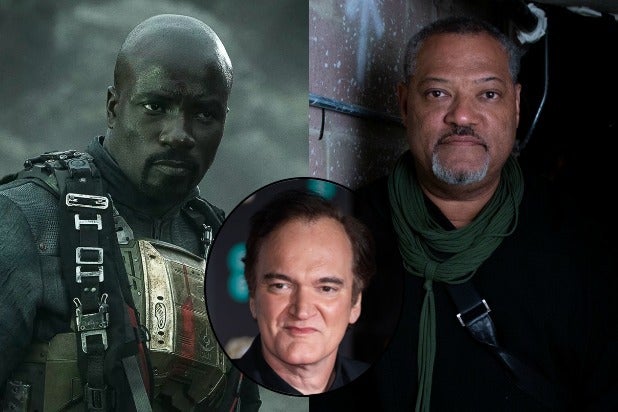 Quentin Tarantino’s films have left a big mark on cinema, but the only thing that might be as wild as shooting Hitler in a burning theater or beating up the Manson family might be the movies he has not made… like a “Luke Cage” film with Laurence Fishburne.

This past week, Tarantino appeared on Amy Schumer’s podcast “3 Girls, 1 Keith,” and the conversation turned to an idea that came to him while working on “Pulp Fiction” — to make a movie about the first black superhero to get his own comic book. Tarantino said that he was a big comic book collector growing up and that Marvel’s “Luke Cage” was his favorite series, fitting considering Cage was created alongside the wave of blaxploitation films in the 1970s that the filmmaker has also expressed passion for.

So what killed the idea? Tarantino pins it on bickering with his “comic-geek friends,” who didn’t like his idea to have Fishburne play Luke. At the time, Fishburne was on a roll with performances in films like Spike Lee’s “School Daze” and Abel Ferrara’s polarizing crime thriller “King of New York,” the latter of which Tarantino thought was proof he was ready for the role. But Tarantino’s friends thought that someone else should play the hero: Wesley Snipes.

Also Read: Quentin Tarantino on What Happened to Leonardo DiCaprio's Character After 'Once Upon a Time ... in Hollywood'

“All my friends were like, ‘It’s got to be Wesley Snipes,'” Tarantino recalled. “And I go, ‘Look, I like Wesley Snipes, but Larry Fishburne is practically Marlon Brando. I think Fish is the man.’ And they’re like, ‘Yeah, but he’d have to get in shape in a big way. Snipes is that way already!’ And I go, ‘F–k that! That’s not that important! F–k you, you ruined the whole damn thing!'”

Film buffs know what happened next: “Pulp Fiction” became arguably Tarantino’s most famous film, earning the Palme D’Or, a screenplay Oscar, and the adoration of film school dudes everywhere. Riding high from that film’s success, Tarantino decided to explore his passion for blaxploitation not with “Luke Cage” but with Pam Grier in the cult film “Jackie Brown.”

Meanwhile, Fishburne went on to take his most iconic role as Morpheus in “The Matrix,” while Snipes did the same with another superhero film, “Blade.” More than two decades later, “Luke Cage” finally got the Hollywood treatment with a two-season Netflix series starring Mike Colter.