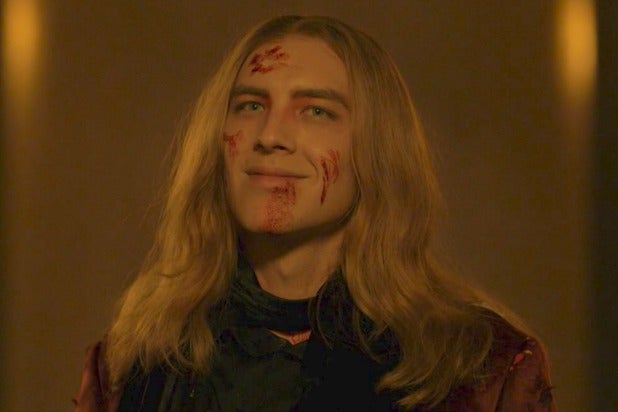 (Warning: This post contains spoilers for the finale of “American Horror Story: Apocalypse.”)

We wondered last week how exactly Ryan Murphy, Brad Falchuk and the rest of the creative team on “American Horror Story: Apocalypse” could possibly finish up this whole thing in just one episode. And in Wednesday’s finale, we got our answer: not that well. The “AHS: Apocalypse” season finale speeds through the resolution to what was a pretty epic tale, leaving big plot threads dangling and not really paying off on so many points the show had set up early on.

So in order to work through our frustration with the finale, let’s take a look at the parts of the episode, and the season as a whole, that just don’t make sense now that it’s finally all over.

Also Read: The Ending of the 'AHS: Apocalypse' Finale Made Absolutely No Sense

1. What’s up with Emily and Timothy, the teenagers from Outpost 3?

It was always kind of a mystery why Emily (Ash Santos) and Timothy (Kyle Allen) were kidnapped and taken to the outpost when the nuclear apocalypse went down. They were told it was because of their DNA or whatever, but that always felt like a cover for something more nefarious, especially after it was discovered that it was Satanists who both caused the apocalypse and set up the outposts.

The end of the finale feels like it’s supposed to be an answer to that question of why they were chosen. After Mallory (Billie Lourd) successfully averts the apocalypse, the two meet by chance and then have a kid who ends up being a new Antichrist. So presumably, they were picked because Michael (Cody Fern) or somebody else knew about that potential.

But why? Michael Langdon was the Antichrist because he came to be under pretty specific circumstances — having been conceived through the union of a living woman and a dead man.

There’s no tangible evidence anywhere in “AHS: Apocalypse” that Emily and Timothy are special in a similar way. By all appearances they’re just regular people. And why would that potential matter in a world in which the Antichrist is already running around being evil? Seriously, nothing about this whole story really follows.

2. Why would Mallory need to go to the outpost to survive if the other witches survived without shelter?

Cordelia comments early in the finale that the safest place for Mallory is right under Michael’s nose while placed under an identity spell to suppress her magical abilities. Meanwhile, Cordelia (Sarah Paulson), Myrtle (Frances Conroy) and Madison (Emma Roberts) survive by, apparently, burying themselves alive and placing themselves in some kind of hibernation. It’s unclear why the outpost is a better option, because there’s no indication that Mallory would be able to break the spell on her own, should something happen to Cordelia.

Also Read: 'AHS: Apocalypse': Why Kathy Bates Refused to Pray to Satan While Playing a Satanist

The only possible explanation is that Cordelia knew that if she herself were to die in the apocalypse, that would allow Mallory to attain the full powers of the Supreme, which I guess could cause her to “wake up” from the identity spell and also allow her to pull off the time travel thing. That is, after all, how the whole thing ended up playing out anyway.

But if that was actually the plan, it seems as though Cordelia could have just killed herself before the apocalypse, granting Mallory the Supreme powers and doing the time travel thing earlier. There would have been no need for the apocalypse to ever happen, much less put Mallory in such a dangerous position.

3. Why did any of that crazy stuff that went down in Outpost 3 happen?

It’s easy to forget all that stuff, but narratively everything that happened in the first three episodes of “AHS: Apocalypse” was right before the big final battle. So you have Michael showing up talking about how outposts are being overrun and he needs to take some people to another safe place, then he does some tests to figure out who to take and the Rubber Man makes Mr. Gallant (Evan Peters) murder his grandma, Evie (Joan Collins) and some dead snakes come back to life and then Mead (Kathy Bates) and Venable (also Paulson) poison everybody.

None of those things are addressed in the finale. No explanation for why Michael was visiting the outpost. No info about who has been taking out the other outposts, or if Michael was lying about that. No mention of what Michael had been up to at all over the 18 months since the apocalypse happened. It’s as though the writers forgot about all that stuff just as quickly as many viewers did.

4. Who was the Rubber Man in the outpost?

I know I mentioned this above, but it bears repeating because it was such a huge thing at the time. The show demonstrated very clearly both that Michael was not the one wearing the suit, because he was present in his normal attire while the Rubber Man was having sex with Mr. Gallant. Maybe it was some kind of projection of Michael’s? The actual Rubber Man was his dad, after all, and in a flashback we saw that Michael dressed up as the Rubber Man as a teenager. But that’s just a guess because “AHS” declined to actually explain anything about it. Right now it just feels like a random reference.

5. How even does the magic time travel spell work?

Last week, Mallory went back to 1918 Russia, clearly as some kind of projection since she faded out and returned to the present as her powers waned. But this time she went back in time, ran over teenaged Michael with a car… and then just stayed there in the past. These concepts do not line up at all, and there was so little explanation for what the tempes infinitum spell actually did that we can’t reconcile them.

6. Why did the plane that flew Coco and Mallory to the outpost not have a pilot?

At the end of the cold open for the very first episode of “AHS: Apocalypse” we saw Coco (Leslie Grossman), Mallory, Mr. Gallant and Evie get on a plane that took them to Outpost 3. And as the scene ended, just before the opening credits started, they go into the cockpit and see that the plane is flying itself. And no mention was ever made of this phenomenon after that scene. Was there a reason? There had to be, right? It was a shocking point they made sure to include in the premiere, so why do they never come back to it or decide it was worth clearing up?