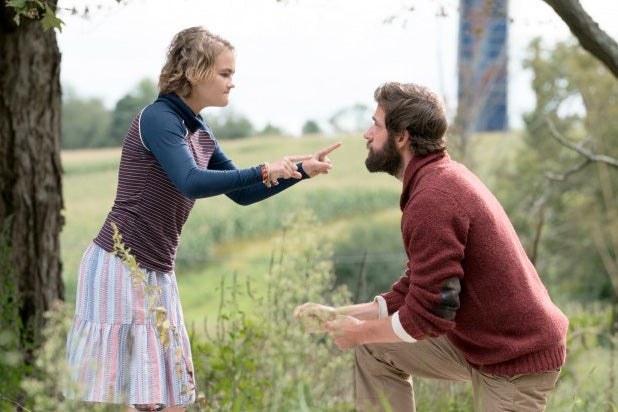 Paramount’s “A Quiet Place” continues to perform very well at the box office in its third weekend, as early estimates have it taking back the No. 1 spot with a $20-21 million total after making $6.4 million on Friday.

The word of mouth for John Krasinski’s horror film has been stellar, with Paramount capitalizing on the buzz by adding 219 screens this weekend. Estimates now have the film finishing this weekend with a domestic total of approximately $130 million, the same amount that Paramount’s top film of 2017, “Transformers: The Last Knight,” made in its entire domestic run.

Warner Bros./New Line’s “Rampage” is facing unexpected competition for the No. 2 spot from two comedies entering theaters this weekend: STX’s “I Feel Pretty” and Fox Searchlight’s “Super Troopers 2.” “Rampage” made $5 million on its second Friday and is looking at a weekend estimate of $18 million, roughly a 50 percent drop from its $35.7 million opening.

“Super Troopers 2,” meanwhile, is blowing by pre-weekend projections for a $8-9 million opening, thanks to the cult fanbase of the original 2001 stoner comedy. Though the sequel got negative reviews with a 33 percent Rotten Tomatoes score, “Super Troopers” fans showed up to the tune of $7.9 million from 2,038 screens, and now it’s looking at an estimated opening of $16-17 million.

That total would be a jump of at least 60 percent over the $9.8 million inflation-adjusted opening that the first “Super Troopers” made 17 years ago. The Broken Lizard comedy troupe that stars in and produced the film made it on a very thrifty $5 million budget, making this a Blumhouse-esque moneymaker for both them and Searchlight.

“I Feel Pretty,” meanwhile, made $6.25 million from 3,440 screens and is currently estimated to earn an $18 million opening, right alongside “Rampage.” That’s above pre-weekend expectations of a $13-15 million opening and slightly below the $19.5 million made by lead star Amy Schumer’s last film “Snatched.” While many reviewers criticized the film for not executing its body-positivity message — it currently has a 35 percent score on the Tomatometer — early audience reception was fairly positive with a B+ CinemaScore grade.

Whether “I Feel Pretty” can move the needle and beat the opening of “Snatched” will likely be determined on Sunday, when the film is estimated to make $4.6 million compared to $8 million for Schumer’s previous film. Regardless, STX will be in a better position financially with this film, as “I Feel Pretty” only had a production budget of $20 million compared to $42 million for “Snatched.”

“Ready Player One” and “Truth or Dare” are neck-and-neck for the final spot in the top five, with both films estimated to make $7-8 million. “Ready Player One” is in its fourth weekend, while “Truth or Dare” is in its second weekend. In tenth is Lionsgate’s new thriller “Traffik,” which is estimated to make $3.5-4 million from 1,046 screens. The film has a 27 percent RT score.