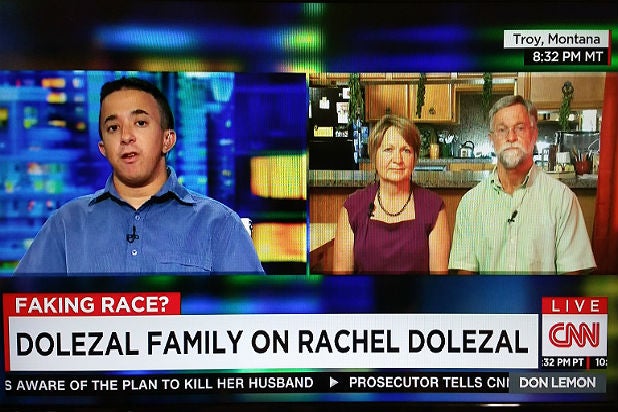 Just hours after Rachel Dolezal, the embattled president of the Spokane, Washington, chapter of the NAACP stepped down from her post, her family appeared on Don Lemon’s “CNN Tonight” questioning her sanity.

“I think there’s a demonstration of being irrational and very disconnected from reality,” the disgraced civil rights leader’s mother Ruthanne Dolezal said Monday, when asked about her daughter’s state of mind.

Dolezal has faced intense scrutiny and public ridicule for saying she is African-American while her Montana birth certificate identifies her as Caucasian.

“Many of the things she’s done are not rational, and a normal, sane person wouldn’t have taken the approach that she has taken,” her father Larry Dolezal told Lemon.

Dolezal’s parents appeared on CNN via satellite from their home in Troy, Montana, while her adopted brother Ezra Dolezal joined Lemon on set.

“It is a baffling thing,” Ezra said as he searched for answers as to why his sister would represent herself as black.

Ezra also accused Dolezal of faking her race to get attention, and described her appearance as “black face because she basically put on dark makeup and said she was born black.”

Ezra said he hadn’t spoken to his adopted sister since 2012, “she cut off everybody,” he explained.

Earlier in the day, multiple media outlets reported that Dolezal sued historically black Howard University in 2002  — before reinventing herself — claiming she was discriminated against because she was white. Dolezal received a master of fine arts degree from the Washington, D.C. university that same year.

Dolezal, who then went by her married name of Rachel Moore, claimed in the lawsuit that she was denied a teaching post and scholarship money because she was a pregnant white woman, court documents obtained by The Smoking Gun said. The District of Columbia superior court dismissed the lawsuit, and in 2005 the decision was upheld by an appeals court.

In another development, Spokane weekly the Inlander announced on Monday that it had parted ways with Dolezal, who had acted as a freelance contributor. An editor’s note on the website stated that she has “not returned any of our messages seeking comhe ment. We are left wondering, like everyone else, what the whole story is… we, too, feel manipulated and deceived.”

Dolezal will officially break her silence in an interview with Matt Lauer on Tuesday’s “Today” show. She will also sit down for separate interviews with Savannah Guthrie for “NBC Nightly News,” Melissa Harris-Perry for MSNBC, and NBCBLK, NBCNews.com’s African-American vertical, according to Today.com.