Former “Bachelorette” star Rachel Lindsay is stepping away from her role as co-host of the “Bachelor Happy Hour” podcast, the show announced Tuesday.

No new co-host for Kufrin has been named, but Warner Bros. said Tuesday that a replacement would be announced at a “later date.” 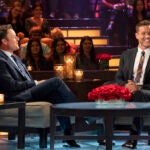 Lindsay’s exit comes as the Wondery podcast reaches its 100th episode milestone and follows through on her earlier stated decision to leave the show at the end of her contract. It also severs her last professional connection to the franchise, which began with her appearance as a contestant on “The Bachelor” in 2017 and her turn as “The Bachelorette’s” first Black lead later that year.

Lindsay, who also co-hosts The Ringer’s “Higher Learning” podcast with Van Lathan and serves as a correspondent for “Extra,” has been vocal about her criticism of the “Bachelor” franchise, most notably regarding the show’s handling of race. She previously threatened to walk away if the show didn’t name a Black leading man (Matt James was announced as the new star shortly after her comments) and clashed with host Chris Harrison over the most recent season’s race controversy.

“I’ve been struggling, that’s no secret,” Lindsay said on Tuesday’s episode of “Bachelor Happy Hour.” “And it’s been really, really hard for me lately … I’m definitely closing the door, but I’m not locking it and throwing away the key. It’s just, I have to, for me, walk away.”