ESPN is taking Rachel Nichols off its NBA programming, which includes canceling her daytime show “The Jump.”

“We mutually agreed that this approach regarding our NBA coverage was best for all concerned. Rachel is an excellent reporter, host and journalist, and we thank her for her many contributions to our NBA content,” David Roberts, senior vice president of production, said in a statement.

Nichols, who is still under contract with ESPN for another year, has been embroiled in controversy ever since her 2020 comments regarding former ESPN colleague Maria Taylor re-surfaced in a New York Times story in July. In a leaked phone conversation last year, Nichols suggested Taylor was picked over her to cover that year’s NBA Finals because of her race. 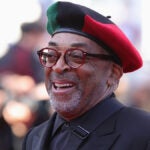 Sports Business Journal first reported on Nichols and “The Jump.” No decisions have been made on Nichols’ future or other ESPN work, an individual with knowledge of the decision told TheWrap.

“The Jump” will be replaced by a new afternoon studio show.

In the conversation with LeBron James’ advisor Adam Mendelsohn — which was accidentally recorded and uploaded to ESPN’s servers because Nichols forgot to turn her video camera off — Nichols expressed frustration that Taylor had been chosen over her to host “NBA Countdown” during last year’s NBA Finals, suggesting that the network made the decision because it was “feeling pressure” on diversity.

The New York Times reported last month that several of the company’s top NBA analysts had considered boycotting this year’s playoffs over how ESPN handled the situation.

Rachel Nichols was eventually taken off the network’s NBA Finals coverage. Taylor has since left ESPN for a gig with NBC Sports.