Sony has pulled out of ‘Spider-Man 4’ with Sam Raimi and Tobey Maguire because the director did not want to move forward with the script in hand, the studio announced on Monday.

But "Spider-Man" will live on, since the studio has chosen to reboot the franchise for 2012 with another team — another actor and director in charge. 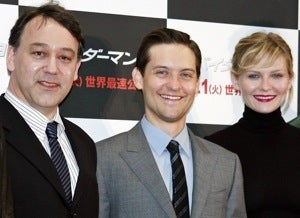 Raimi, who directed the first three Spidey movies, was supposed to start shooting in February 2010. The date was pushed to March because the script wasn’t ready. In all, the "Spider-Man 4" script was about to embark on its fourth rewrite, this one by Alvin Sargent, the screenwriter for Spideys 2 and 3.
Meanwhile the movie’s stars, Maguire and Dunst, cooled their heels while waiting for the go-ahead.
The film was meant to be the studio’s big tentpole release for May 2011. The decision on Monday leaves the studio with a major hole in its release slate.
What’s more, it brings to an end a collaboration that has inspired many millions of fans, while making billions of dollars for the studio.
“We have had a once-in-a-lifetime collaboration and friendship with Sam and Tobey, and they have given us their best for the better part of the last decade," said Matt Tolmach, president of Columbia Pictures, who has served as the studio’s chief production executive since the beginning of the franchise. "This is a bittersweet moment for us because while it is hard to imagine ‘Spider-Man’ in anyone else’s hands, I know that this was a day that was inevitable.”
The studio called Tobey Maguire and Kristen Dunst to give them the bad news on Monday, which came to a head in the last few days, as the pressure to make a decision about the production intensified. Production staff had already been told to clear out their desks two weeks ago, while the script — already gone through three versions — got yet another redo by Sargent.
Meanwhile, Sony Pictures Entertainment Co-Chairman Amy Pascal had already ordered a reboot of the franchise from writer James Vanderbilt, who wrote the "Zodiac" screenplay. That involves a different take on the superhero, and will be recast, with a different director leading the production.
That is intended to be released in May 2012.
Asked if this film will be in 3D, a senior executive close to the film would say only, "You’ll have to wait on that."
Shooting of that film is expected to begin this year.

"Spider-Man" has been a big moneymaker for the studio, with theatrical revenue from the three films over $2.5B, plus licensing — "a big driver through our joint partnership with Marvel," studio spokesperson Steve Elzer, told TheWrap.
However, he added: "It is worth saying that the two biggest years in Sony Pictures history — 2009 and 2006 — were years in which we did not have Spidey."
The studio released this statement:
Culver City, CA (January 11, 2010)  —  Peter Parker is going back to high school when the next Spider-Man hits theaters in the summer of 2012.
Columbia Pictures and Marvel Studios announced today they are moving forward with a film based on a script by James Vanderbilt that focuses on a teenager grappling with both contemporary human problems and amazing super-human crises.
The new chapter in the Spider-Man franchise produced by Columbia, Marvel Studios and Avi Arad and Laura Ziskin, will have a new cast and filmmaking team. Spider-Man 4  was to have been released in 2011, but had not yet gone into production.
“A decade ago we set out on this journey with Sam Raimi and Tobey Maguire and together we made three Spider-Man films  that set a new bar for the genre.  When we began, no one ever imagined that we would make history at the box-office and now we have a rare opportunity to make history once again with this franchise. Peter Parker as an ordinary young adult grappling with extraordinary powers has always been the foundation that has made this character so timeless and compelling for generations of fans. We’re very excited about the creative possibilities that come from returning to Peter’s roots and we look forward to working once  again with Marvel Studios, Avi Arad and Laura Ziskin on this new beginning,” said Amy Pascal, co-chairman of Sony Pictures Entertainment.
“Working on the Spider-Man movies was the experience of a lifetime for me.  While we were looking forward to doing a fourth one together, the studio and Marvel have a unique opportunity to take the franchise in a new direction, and I know they will do a terrific job,” said Sam Raimi.
“We have had a once-in-a-lifetime collaboration and friendship with Sam and Tobey and they have given us their best for the better part of the last decade.This is a bittersweet moment for us because while it is hard to imagine Spider-Man in anyone else’s hands, I know that this was a day that was inevitable,” said Matt Tolmach, president of Columbia Pictures, who has served as the studio’s chief production executive since the beginning of the franchise. “Now everything begins anew, and that’s got us all tremendously excited about what comes next.  Under the continuing supervision of Avi and Laura, we have a clear vision for the future of Spider-Man and can’t wait to share this exciting new direction with audiences in 2012.”
"Spider-Man will always be an important franchise for Sony Pictures and a fresh start like this is a responsibility that we all take very seriously," said Michael Lynton, Chairman and CEO of Sony Pictures.  "We have always believed that story comes first and story guides the direction of these films and as we move onto the next chapter, we will stay true to that principle and will do so with the highest respect for the source material and the fans and moviegoers who deserve nothing but the best when it comes to bringing these stories and characters to life on the big screen."
The studio will have more news about Spider-Man in 2012 in the coming weeks as it prepares for production of the film.
x