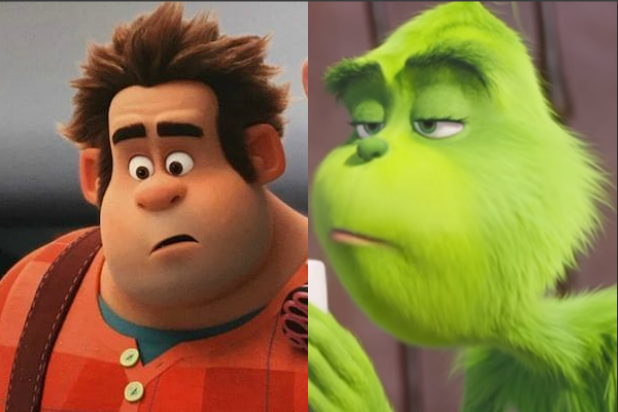 With no new wide releases out this weekend, November’s family films were left to contend for the top spot for one more weekend, and Illumination/Universal’s “The Grinch” — the earliest of the family releases — may end up being the highest grossing film of that month.

Despite being in its fifth week, “Grinch” is neck-and-neck with Disney’s “Ralph Breaks the Internet” for the top spot on this weekend’s charts. “Ralph” is holding the lead with $16.2 million in its third weekend, while “Grinch” has $15.1 million in its fifth.

“Ralph” had the second-highest Thanksgiving opening weekend two weeks ago, just beating out that of Disney’s 2016 Thanksgiving entry “Moana.” Since then, “Ralph” has been showing numbers consistent with “Moana,” and is currently 3 percent behind the pace of that film with a domestic total of $140 million. If that trajectory continues, the “Wreck-It Ralph” sequel should finish its theatrical run with a domestic total of $240-250 million.

But “Grinch” could end up with a much higher box office total. Despite facing heavy competition in the past few weeks in the form of “Ralph” and WB’s “Fantastic Beasts: The Crimes of Grindelwald,” the Dr. Seuss adaptation has racked up $223 million domestically through five weekends.

Now that it has weathered the openings of two family films, “Grinch” enters December as the main Christmas-themed offering, which should allow it to continue to perform strongly in the latter stage of its run, even as more family films like “Spider-Man: Into the Spider-Verse” and “Mary Poppins Returns” hit theaters in the coming weeks.

In third this weekend is MGM’s “Creed II,” which is approaching the $100 million mark after making $10.3 million in its third weekend to bring its total to $96.4 million. “Fantastic Beasts: The Crimes of Grindelwald” is in fourth with $6.8 million in its fourth weekend and a total of $145 million, 27 percent behind the pace of the first “Fantastic Beasts.”

Completing the top five is “Bohemian Rhapsody,” which stays in fifth for one more weekend with $6 million, giving the Fox film a total of $173 million after six weekends. Outside the top five, Universal/DreamWorks/Participant Media’s “Green Book” has earned a $3.9 million third weekend, matching its performance last weekend and pushing its total to just under $20 million.

The Peter Farrelly drama earned five Golden Globe nominations this week, and Universal is hoping that the awards season will allow “Green Book” to leg out and find some profitability. The same won’t be said for Fox’s “Widows,” a film that was critically acclaimed but shut out of the Golden Globes and still hasn’t made back its $42 million budget. The Steve McQueen crime film made $3.1 million this weekend for a total of $38 million.

Finally, WB’s “A Star Is Born” received a boost in its 10th weekend thanks to a one-week engagement on 375 IMAX screens, earning $2.4 million to bring its domestic total to $197 million. Bradley Cooper and Lady Gaga’s remake of the Hollywood classic is fulfilling its role as an expected major awards contender, earning five Golden Globe nominations this week.