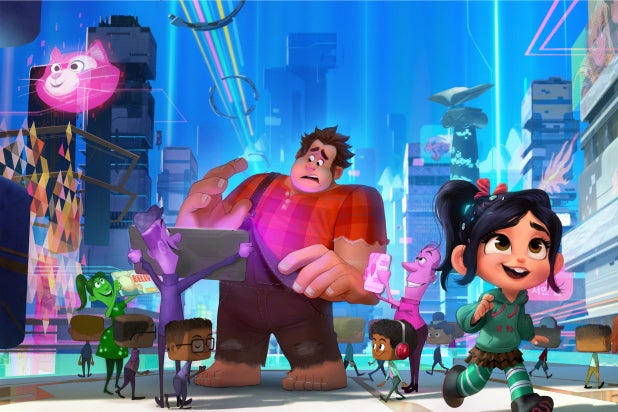 “The Grinch” and “Fantastic Beasts: The Crimes of Grindelwald” are about to get a lot of company at movie theaters nationwide this Thanksgiving weekend. Four wide releases will be hitting theaters, with Disney’s “Ralph Breaks the Internet” expected to top the charts for the lucrative five-day holiday period.

Disney is projecting a five-day launch for the “Wreck-It Ralph” sequel of around $68 million, while independent trackers are looking at an opening of approximately $72 million. That would be a big step up from the $49 million three-day opening that “Wreck-It Ralph” made back in March 2012.

But it’s very possible that “Ralph” could overperform. Interest in the film has been high since Disney released a trailer featuring Sarah Silverman’s Vanellope von Schweetz meeting the Disney Princesses, and Fandango reported that presales for the film on their site are beating those of Disney’s 2016 Thanksgiving release “Moana,” which had an $82 million five-day opening.

On top of that, critics have praised it as a worthy successor to the original, giving it a current Rotten Tomatoes score of 92 percent. If “Ralph” lives up to its potential, that could spell trouble for “The Grinch” and “Fantastic Beasts,” which will also be looking for a strong hold with family audiences this weekend and might wind up fighting for a splintered demographic.

“Ralph Breaks the Internet” sees John C. Reilly return as the titular video game baddie, who accidentally breaks Vanellope’s arcade game in an attempt to cheer her up. When they discover that the only replacement part for the game is being auctioned on eBay, the two head off to the Internet to find it. Bill Hader, Gal Gadot and Taraji P. Henson also star, with Alfred Molina, Jack McBrayer and Jane Lynch rounding out the cast. Rich Moore and Phil Johnston direct.

Also looking at a solid opening is “Creed II,” the sequel to Ryan Coogler’s critically-acclaimed “Rocky” spinoff. Moving from Warner Bros. to MGM, “Creed II” is projected to have an extended opening of $50 million, a slight increase from the $42 million opening “Creed” had on Thanksgiving weekend in 2015.

“Creed II” sees Coogler stay on as producer while a new writing/directing team takes over. Steven Caple, Jr. directed this film, with Rocky himself, Sylvester Stallone, writing the script with Juel Taylor from a story credited to Sascha Penn and “Luke Cage” showrunner Cheo Hodari Coker. While critics didn’t go as crazy for this sequel as they did for Coogler’s film, reviews have still been positive with an 81 percent Rotten Tomatoes score.

Along with the reviews, lead star Michael B. Jordan has seen his popularity soar thanks to his performance in “Black Panther.” This is Jordan’s first feature film appearance since Erik Killmonger hit the big screen, so expect him to add some more interest to the film, especially among African-American audiences, who make up the majority among moviegoers interested in the film in pre-release polling.

“Creed II” sees Jordan return as the late Apollo Creed’s son, Adonis, as he continues to rise up the boxing ranks with Rocky and his girlfriend Bianca (Tessa Thompson) by his side. But the good times are cut short when Adonis is challenged by Viktor Drago (Florian Munteanu), son of Ivan Drago (Dolph Lundgren), the man who killed Apollo in a fight 33 years ago. Phylicia Rashad and Milo Ventimiglia also star.

Also Read: How the TV Star Has Replaced the Movie Star, According to One Top Talent Agent

While “Green Book” likely won’t make the top five this weekend, it has a chance to win over older audiences and leg out through the holiday season. It won the Audience Award at the Toronto International Film Festival, and in its limited release this past weekend, it earned a sterling A+ on CinemaScore to go with the 83 percent Rotten Tomatoes score it won from its festival run.

The outlook isn’t nearly as good for “Robin Hood,” which comes with a reported budget of just under $100 million. The film has a rather rotten Rotten Tomatoes score of just 15 percent as of this writing, and belongs to a genre that hasn’t fared well recently: modern retellings of classic tales.

Last year’s “King Arthur: Legend of the Sword” was one of the biggest bombs of 2017, failing to make back its $175 million budget with just $148.6 million grossed worldwide. More recently, Disney’s “Nutcracker and the Four Realms” failed to draw interest in a new version of the famous Russian ballet. Made on a $130 million budget, the film has only grossed $117 million worldwide through three weekends in theaters.

“Green Book” stars Mahershala Ali and Viggo Mortensen as jazz musician Dr. Don Shirley and his unlikely bodyguard, Tony Lip. Looking for a job, the prejudiced Tony is tasked with escorting Dr. Shirley through the Jim Crow South for his jazz tour, using the titular Green Book to find hotels that African-Americans are allowed to stay in. Linda Cardellini also stars, with Peter Farrelly as director.

Also arriving this weekend in limited release are two potential Best Picture Oscar contenders: Netflix’s “Roma” and Fox Searchlight’s “The Favourite.” Both films won major honors at the Venice Film Festival, with “Roma” being hailed as the finest work ever from director Alfonso Cuaron, following a poor caretaker who assists a family in one of the wealthiest districts in Mexico City. “The Favourite” has also received critical acclaim as critics call it the most accessible film from director Yorgos Lanthimos, who has made challenging fare like “The Lobster” and “The Killing of a Sacred Deer.”

“The Favourite” will be a big release for Fox Searchlight, which was the biggest indie distributor of last year’s awards season with Oscar winners “The Shape of Water” and “Three Billboards Outside Ebbing, Missouri.” With Searchlight’s future hanging in doubt as Fox’s merger with Disney draws near, the distributor will be looking for a big performance from this dark comedy starring Olivia Coleman, Rachel Weisz and Emma Stone.

“Roma” is also an important release for Netflix, which is trying to leave a big footprint on awards season. Success with “Roma” could make Netflix the first streaming studio to win the Best Picture Oscar and build a reputation as a harbor for auteurs in the streaming age. As part of the deal to distribute the film, Netflix is giving “Roma” a limited theatrical run before its release on streaming on Dec. 14. But we won’t know just how interested audiences are in seeing “Roma” on the big screen, as Netflix will not be releasing box office returns.

A look at top animated moneymakers as of September 2019, from "The Lion King" to "Zootopia." The numbers are not adjusted for inflation.