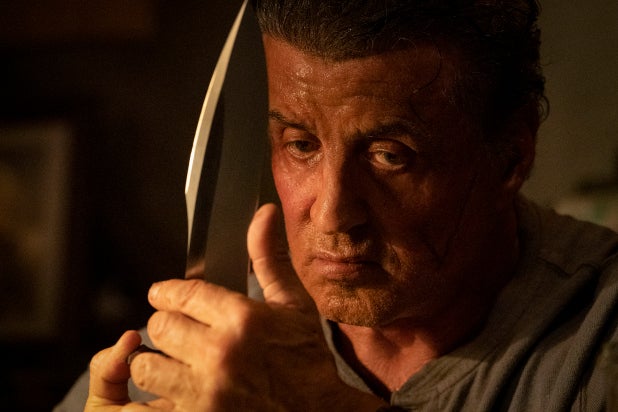 The montage at the end of “Rambo: Last Blood” — snippets from all the “Rambo” films stretching back four decades — turns out to be a scrapbook browse of action-trope quaintness, when all a “Rambo” movie ever really needed was a loving camera hold on a sweat-slick, buff, and snarling Sylvester Stallone armed to the teeth or surrounded by explosions.

There was death, sure, but mostly posturing, and it’s worth remembering that scarred ex-Green Beret John Rambo wasn’t a serial killer in “First Blood”; he just did his guerrilla maneuvers, hurt a lot of mean cops, and blew things up. But when Stallone reached Medicare age, 2008’s “Rambo” (the fourth) sacrificed roided-out preening and younger man’s athletics for wall-to-wall butchery and a body count in the hundreds.

Also Read: 'Rambo: Last Blood' Trailer: Stallone's Past and Present Merge Into One

The “Rambo” series is the rare franchise so completely attuned to its no-nonsense formula that a plot point that might be suspenseful and consequential in most other thrillers — how to cross the U.S.-Mexico border with an arsenal of weaponry or a drugged, bleeding girl — is skipped over entirely just to get to the killing faster.

Yes, Rambo’s fight is closer to home this time, after installments wreaking havoc in Vietnam, Afghanistan, and Myanmar. We start at his ranch in Arizona, where the mercenary has found a cowboy peace taming horses, playing adoptive host to a kindly grandmother (Adriana Barraza, “Dora and the Lost City of Gold”) and her sweet, motherless teenage granddaughter Gabriela (Yvette Monreal, “Faking It”), and — oh yeah, tending to an intricate network of weapon-lined underground tunnels.

That’s right, nothing to see here, folks, just a loner with international-slaughter issues working things out his way. It is definitely hilarious, though, how the brainlessly efficient screenplay (by Michael Cirulnick and Stallone) tries so casually to introduce what is clearly a future carnage site as, initially, its hero’s special safe space.

We expect Rambo to be protective of Gabriela, for sure, so when she expresses a desire to drive into Mexico and find the dad who abandoned her, it gets shot down — with words! Just words! (Sorry, with Rambo, you have to clarify these things.) But Gabriela drives over anyway, at which point she falls prey to a Trumpian array of bad hombres, including a pair of central-casting cartel sex slavers named Victor (Oscar Jaenada, “Cantinflas”) and Hugo (Sergio Peris-Mencheta, “Snowfall”). (Maybe that’s Stallone’s winking nod to the author of “The Last Day of a Condemned Man,” but the reality is you’ll feel more like a misérable.)

As vengeance kicks in, one starts to realize that the success level of Rambo’s white-savior efforts depends on a revenge math equation involving age, planning and tools. When he’s first looking for Gabriela in Mexico, impulsive and barely armed, 50 guys easily overpower him. Later, when tragedy demands cold forethought, multiple weapons, and time, and Rambo can draw the baddies to his ranch, we know the killing will go like clockwork.

Also, Rambo gets a training montage in the vein of those associated with his creator’s other unkillable series regular, Rocky Balboa, and the sequence is such an energized taunt of what the bloodthirsty can expect, engineering-wise — welding, sawing, digging, spring-loaded spikes, strategic holes, trip-wired bombs, well-placed guns, dismembering mechanisms — that director Adrian Grunberg (“Get the Gringo”) really should have just gone ahead and scored it to “Gonna Fly Now.” Then again, when 50 men eventually prove not enough for this mission man, the booby-trapping is so over-the-top gory, it’s as if Rambo has morphed into Jigsaw. (I smell Lionsgate crossover?)

What’s especially pitiful about this installment, which has been given a perfunctory dark-action look by cinematographer Brendan Galvin (“Self/less”), is how often Stallone tries to give psychic heft to the wounded-warrior part of his creation, as if he were Ethan Edwards in “The Searchers” and not just a monosyllabic killing machine easily triggered.

Aside from the dumb dialogue and pained expressions Stallone can never sell (“I lived in a world of death,” “I know how black a man’s heart can be”), Paz Vega is rendered useless as a south-of-the-border journalist whose own abducted-relative grief and concern for Rambo’s state of mind is supposed to offer a therapeutic counterpoint. To which a movie like “Rambo: Last Blood” can only answer back with, yes, home is indeed where the heart is … going to be ripped out of the villain’s chest. You’ve been warned.