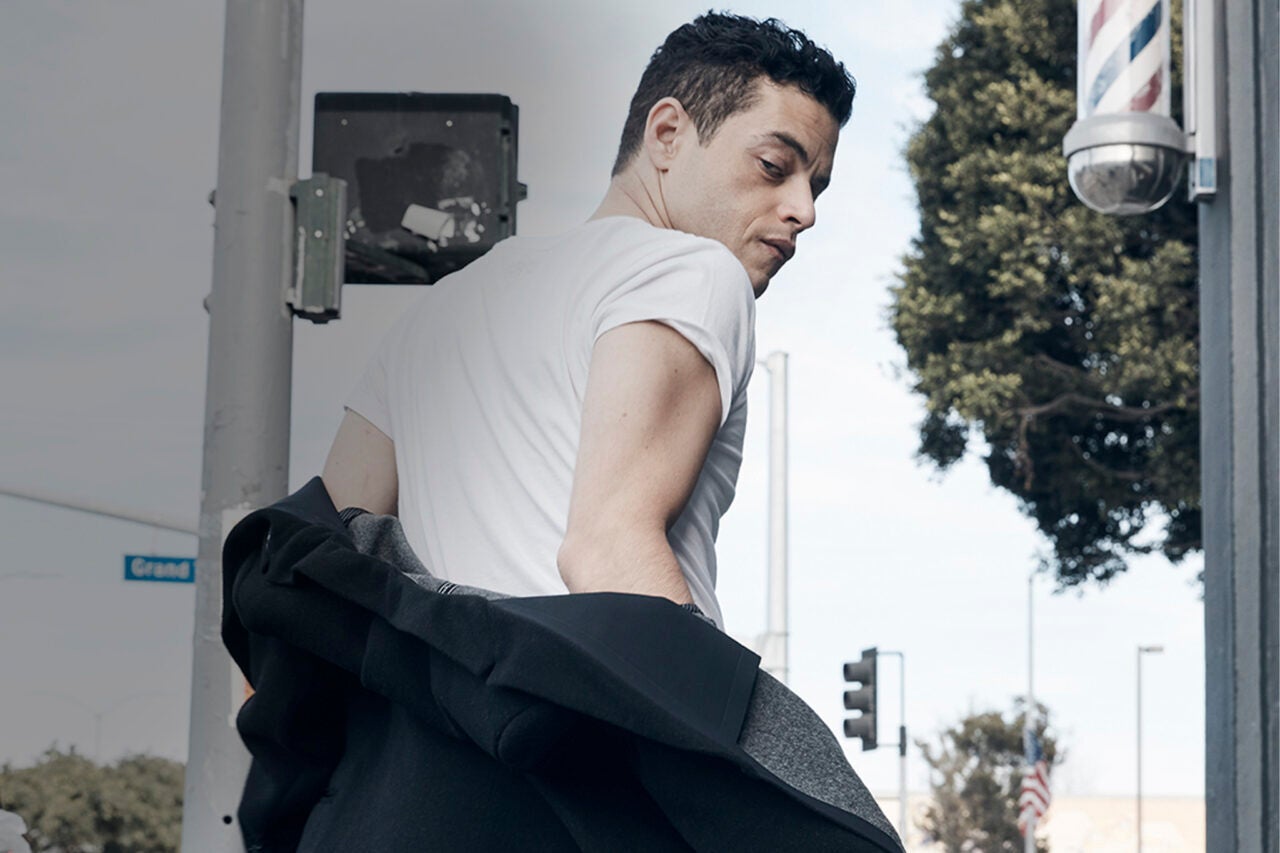 On a Thursday afternoon in Los Angeles, between stacks of colorful album covers by the Beatles, Elvis Presley, David Bowie and many more, Rami Malek demonstrated the moves that helped him bring legendary Queen frontman Freddie Mercury back to life in “Bohemian Rhapsody.” Assuming Mercury’s iconic stance, thrusting his arm forward into that familiar full-power fist pump and then segueing into a stomping tap dance that he likened to “squashing worms on the pavement,” Malek proved that even in a cramped record-store aisle, he had those iconic Mercury moves down.

Malek wasn’t a dancer or singer, and he’d never played piano before taking the job in “Bohemian Rhapsody.” Instead, he was an actor best known for playing a depressed hacker on an oddball USA Network series. “Where the producers got the idea from ‘Mr. Robot,’ of all things, that I could play Freddie Mercury is beyond me,” he said. “But you know, I just put my nose down and gave it my all.”

And he started with Live Aid, the 1985 charity concert that included a Queen set that has since been dubbed one of the greatest live performances of all time. With the help of movement coach Polly Bennett, Malek committed Mercury’s moves to memory for the film’s shot-by-shot re-creation.

“[Live Aid] was the first thing we shot,” Malek said as he sat, relaxed, in a wooden chair, dressed in a black leather jacket, white t-shirt and navy creepers. “It was the most daunting. We spent copious hours trying to figure out all the moves–and you know Freddie is a spontaneous human being in every aspect of his life. He said, ‘If it’s planned, then it’s boring.'”

Shooting that performance, which actually became the final sequence in “Bohemian Rhapsody”, also required Malek to change his physique. In “Mr. Robot,” the 37-year-old actor is thin — frail, even — and he shuffles through scenes unassumingly. To truly become Mercury, he had to add muscle, but mainly he needed to be in prime condition to do a concert set with the same energy Mercury exhibited some 33 years ago. 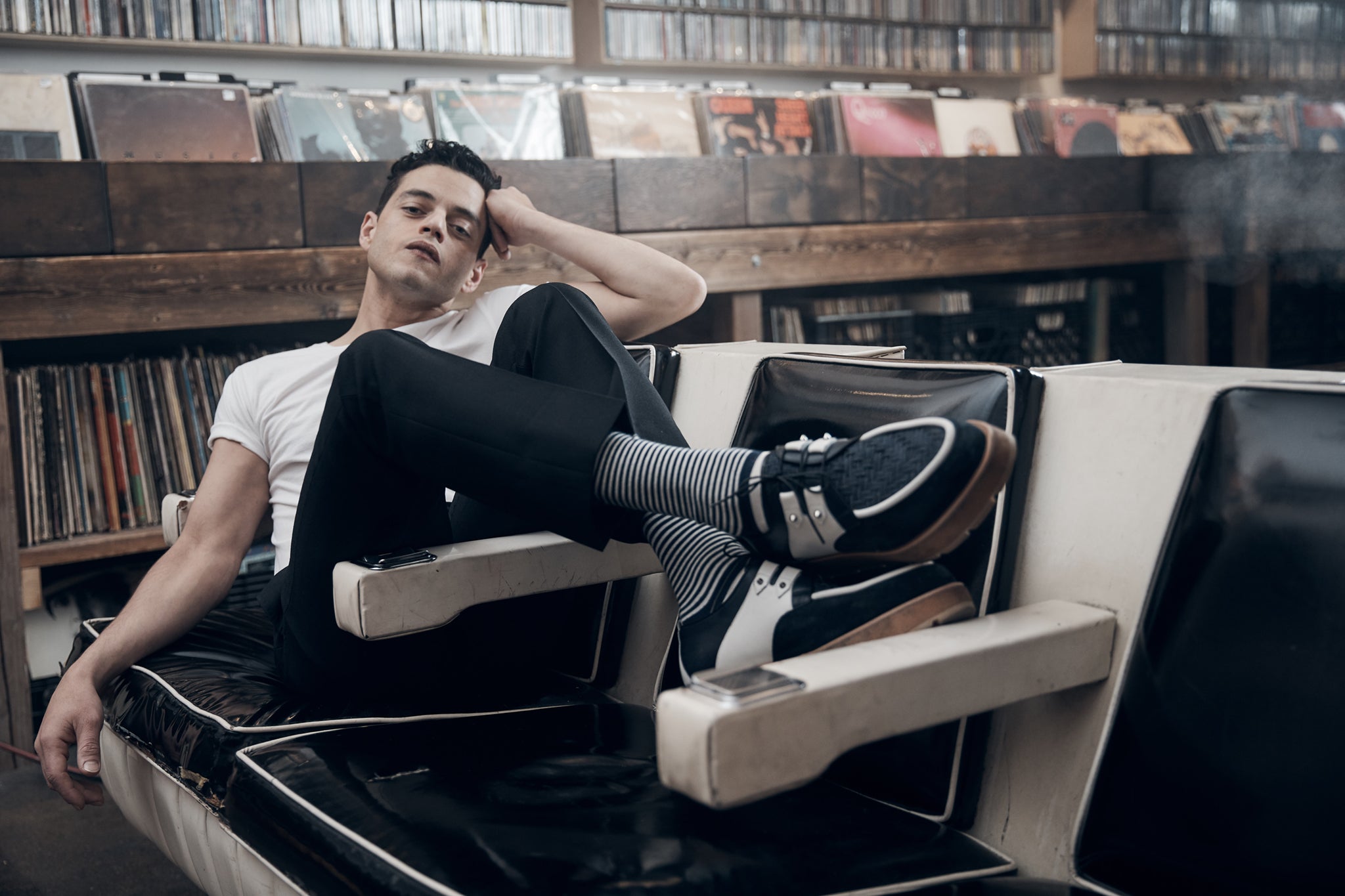 “I didn’t really want to bulk up, per se — I just wanted to get my body into a place where I could do a 22-minute concert over and over for five days and not be out of breath,” he explained. “Well, it’s highly impossible to do that. There were days when I found myself laying on my back trying to just absorb as much air as possible. But at the same time, I was on a very specific diet. I bulked up for that first week and immediately had to drop muscle and weight and go into shooting young Freddie, who is very scrawny. I just had to be really cognizant of when to work out and when to crash diet. I don’t recommend it for anyone.”

Freddie Mercury was born Farrokh Bulsara on September 5, 1946 in Zanzibar, and grew up there as well as in India before moving to England in his late teenage years. Mercury formed Queen with Brian May, Roger Taylor and John Deacon, and EMI Records in the U.K. and Elektra Records in the U.S. signed the band in the early ’70s. They had a commercial breakthrough with their third album, “Sheer Heart Attack,” then became worldwide stars with their 1975 album “A Night at the Opera,” which contained the impossibly grandiose song “Bohemian Rhapsody” and solidified Mercury’s status as one of the most flamboyant and charismatic frontmen in rock music.

Malek, raised in Los Angeles to parents who’d emigrated to the U.S. from Egypt, first auditioned for the role of Mercury in April 2016, some six years after talk of a movie about Queen had first begun. Originally, Sacha Baron Cohen was attached to star, but he dropped out over creative differences with surviving Queen members May and Taylor, who were executive producers on the film. After one audition, May and Taylor wanted to see more, so Malek went to Abbey Road Studios to sing four songs and participate in a mock press conference where he warded off questions like a pro. “I wasn’t prepared for it,” he said, “but I started to answer with my best Freddie, so to speak.”

As the movie prepped under director Bryan Singer, Malek not only had to physically prepare to emulate Mercury, he had to adopt his persona and delve deeply into the man he called a “kaleidoscopic human being.” And he had to do it almost from scratch. “I didn’t know much about Queen,” Malek said. “I knew the songs, I knew what Freddie Mercury looked like, I knew he was a gay icon and is an icon to all of us. But I had no idea of the glam-rock period. I had no idea of his look pre-mustache. I didn’t know what his real name was. I didn’t know what his ethnicity was. I didn’t know that he had a love named Mary Austin whom he was with for six years and who he proposed to.”

To prepare for the film, Malek sat down with many musicians who knew Mercury before his tragic death in 1991 at age 45 due to complications from AIDS. (Mercury, who dated both men and women, lived most of his final years as a gay man, but never divulged his sexual orientation publicly.) Malek spoke to Sting, Bono, Boy George, Ray Davies and, of course, Queen band members May and Taylor.

“I tried to pick everybody’s brain,” he said. “I was basically going through the rock star phone book and seeing if anyone would pick up my call.” 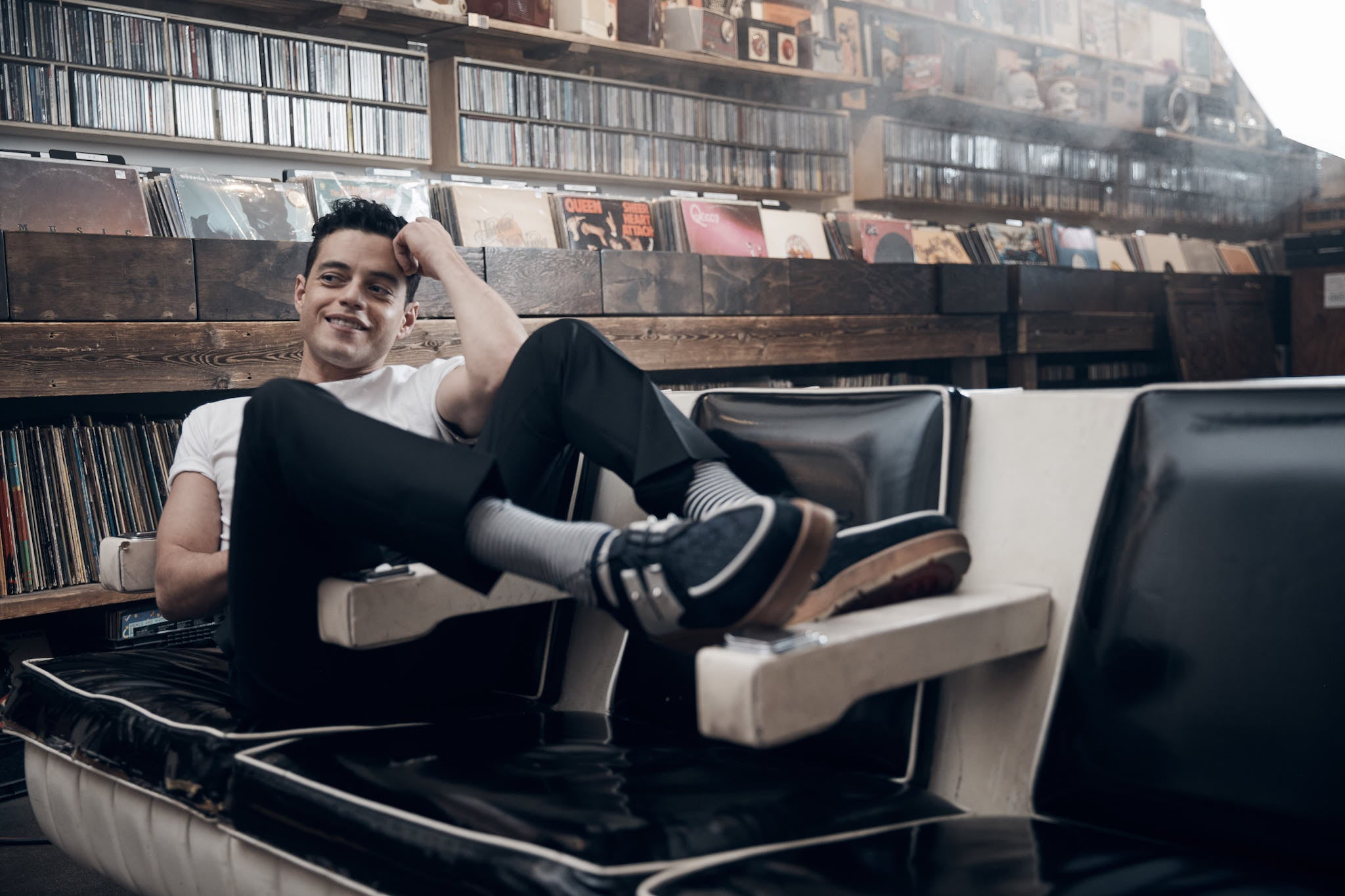 The most important link to Mercury, though, may well have been the musician’s sister, Kashmira Cooke. “I thought, ‘I have one responsibility: to do this human being justice and to make him proud and to make Queen proud,'” said Malek. “I got to spend a lot of time with Kash — I call her Kash, which is a phenomenal thing I never thought I’d be doing in my life — and just being able to talk to her and hold her hand and give her a hug and have tea with her is such a gift. And to have had this experience and to feel some kinship with Freddie Mercury and to hear stories about him through his sister, it means everything to me.”

And then there were those teeth. Mercury was born with four extra teeth in the back of his jaw, pushing his front teeth forward in a way that gave him the nickname “Bucky” when he was younger. Malek actually started practicing with a set of fake teeth a year before shooting even began. (After production wrapped, he had them cast in gold and is planning to auction the grill for charity in true “ostentatious Freddie” fashion.)

“They started out being pretty difficult to deal with,” he said. “We tried out all different sizes and when they first went in I felt very insecure, but immediately I compensated. Physically, I started to sit with more posture and elegance and I thought, ‘Oh, he is so elegant!’ You see him covering up his lips and his teeth all the time, and I could never quite get the hang of it. But as soon as those teeth went in, it was done. It was little things like that that were very informative for me.”

But then there was the singing. Mercury’s greatest talent, besides the ability to commandeer a stage, was a voice that no one has since been able to reproduce. In “Bohemian Rhapsody,” Malek explained, the voice we hear coming out of the actor’s mouth is a combination of his own voice with those of Canadian musician Marc Martel (whose voice is eerily similar to that of the Queen frontman, and who once fronted a Queen tribute band assembled by Taylor) and Mercury himself.

“I never knew how it was going to work,” said Malek. “People would tell me, ‘We’re not using your voice. We’re using Marc Martel’s voice, we’re using Freddie Mercury’s voice.’ Ultimately, every day, I went out there and sang as best I could–every song, every moment, full belt to the point where sometimes our sound engineers would go up to our producers and say, ‘He’s losing his voice, you know that?’ They’ve taken bits of my voice and surrounded them with Freddie’s. At times it’s my voice leading into Freddie’s. Sometimes you hear Marc Martel and my voice.”

And he always, he added, watched Mercury’s performances closely. “I have to listen to him and watch him and try to capture that same energy and the same breaths throughout,” he said. “Ultimately, though, the majority of this is Freddie Mercury, and I don’t want it any other way.”

“Bohemian Rhapsody” had more than its share of behind-the-scenes drama. Singer was fired after going AWOL during production amid personal problems and Dexter Fletcher stepped in to finish the film. (Singer retains the director’s credit but was noticeably missing from promotion for the film’s release.) But the film has earned more than $480 million globally in its first month in theaters, while Queen music climbed back up the charts. “I think that’s the most important takeaway from all of this–that the music and his story are going to outlive us all,” said Malek as he sat in the record store (which, by the way, had been almost completely cleaned out of Queen albums since the movie’s release).

“The gift of playing him is everything to me,” said Malek. “He’s a human being who struggled so much, with every aspect of his identity, his heritage and obviously his sexual identity. And he found a way to be one of the boldest, most audacious, confident, spectacular, authentic, defiant human beings the world will ever know.”

Click here to read more from the Actors/Directors/Screenwriters issue of TheWrap’s Oscar magazine.